From a captivating coastline to dark mysterious caves, wonderful wildflowers and the delightful Lake Indoon, this great trip north has something for everyone.

The starting point for this 655km trip, Cervantes, is 245km northwards from Perth via the Brand Highway, about a three-hour trip. The route north to Jurien is via the Hill River mouth. Motel accommodation, holiday units or camp grounds with full facilities are available at both towns. From Jurien, the trip notes take you north past North Head, Sandy Point, Green Head, Point Louise, Billygoat Bay, Ti Tree Bay, Little Harbour, Little Three Springs, Stockyard Gully Caves and Lake Indoon giving marvellous scope for 4w-driving, fishing and bushwalking. To fully take advantage of the route and explore the fabulous sites you’ll visit will take much more than two days so this trip suits the extended weekend. 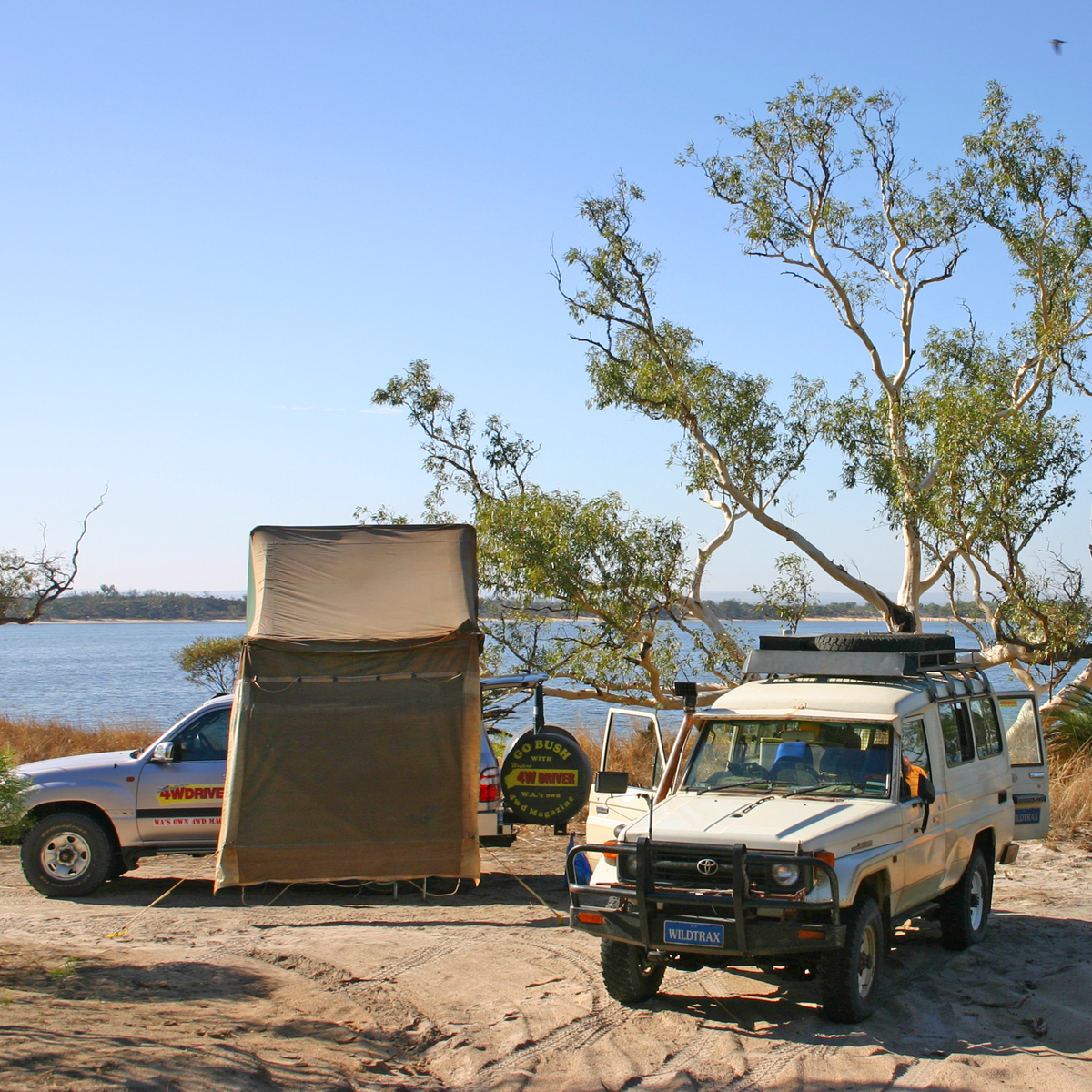 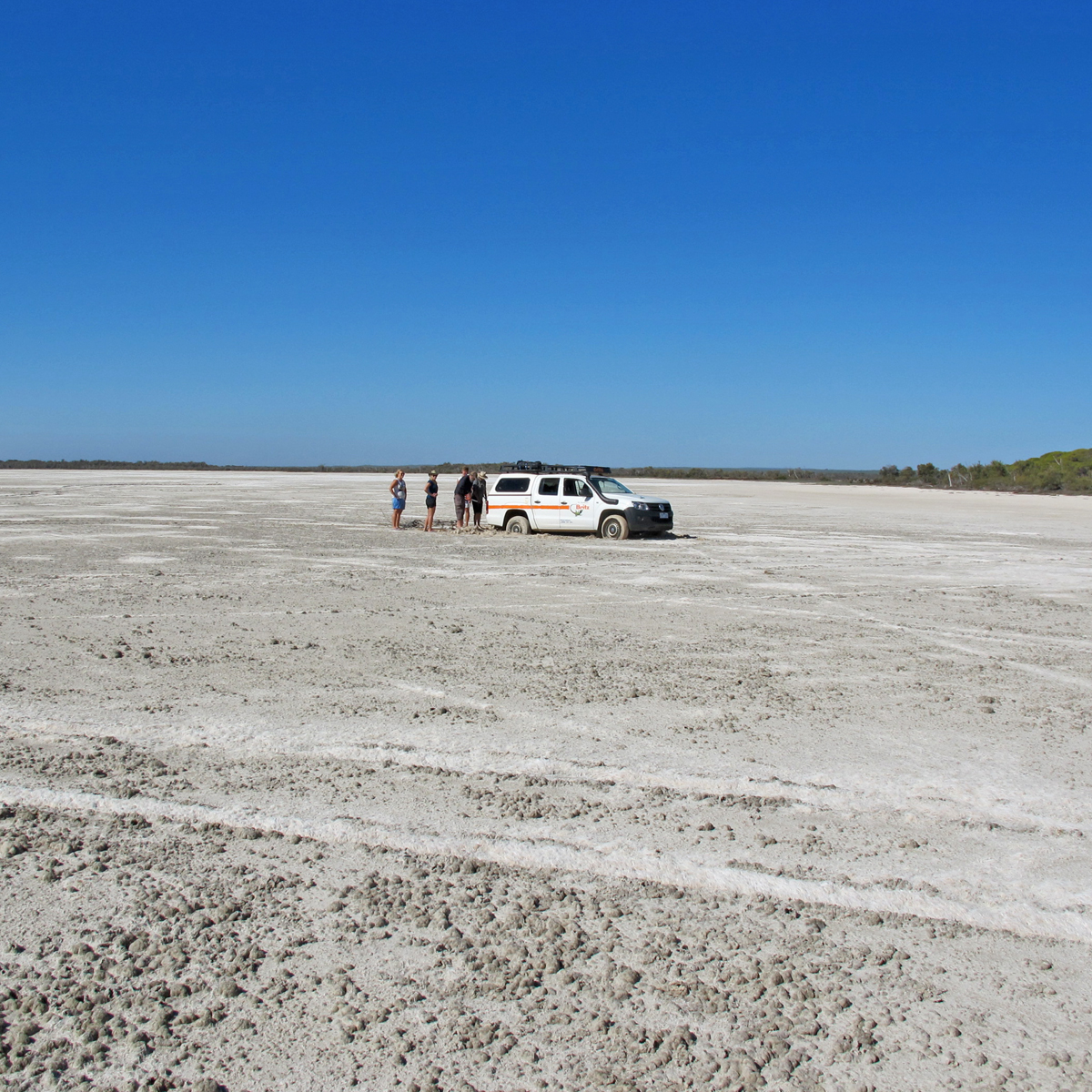 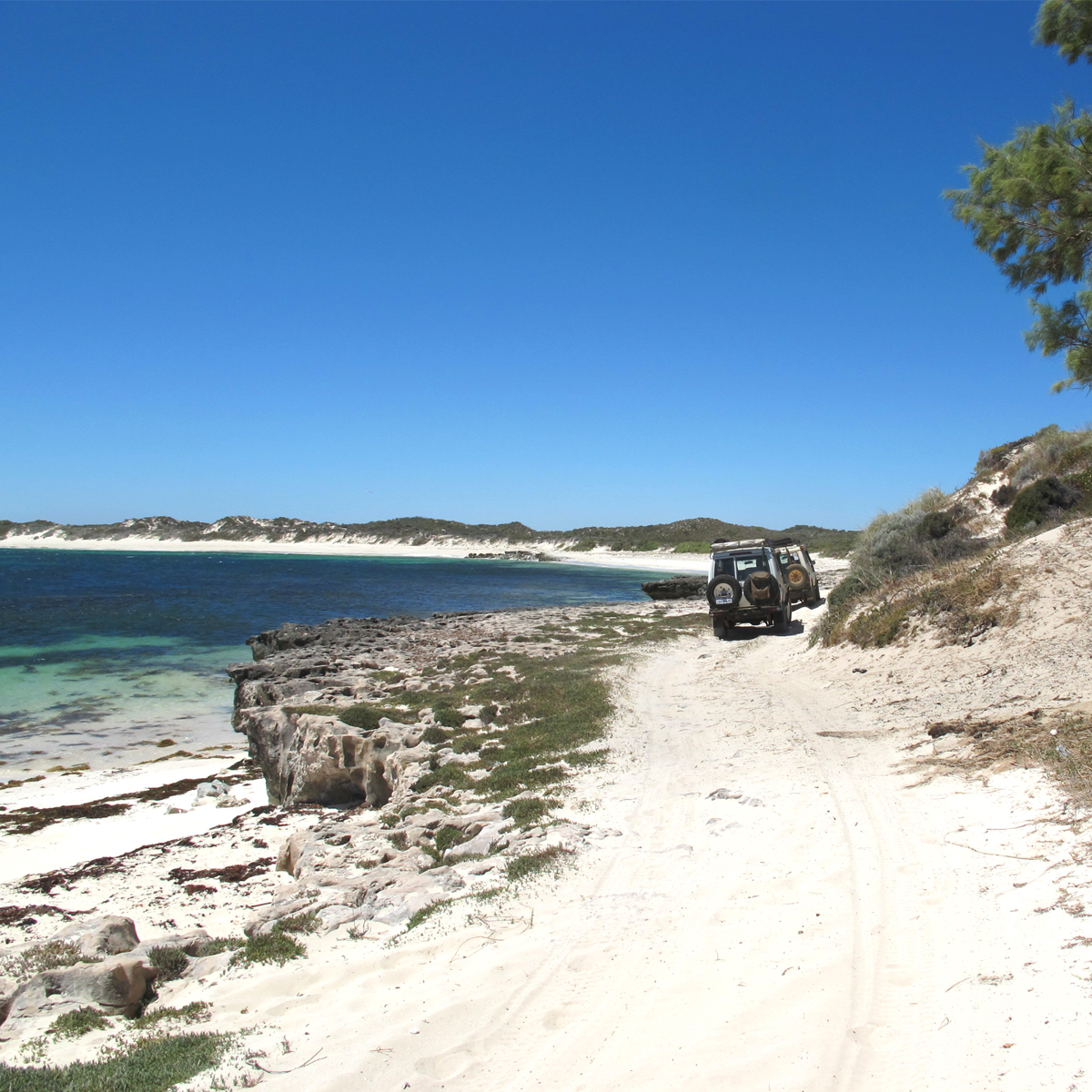 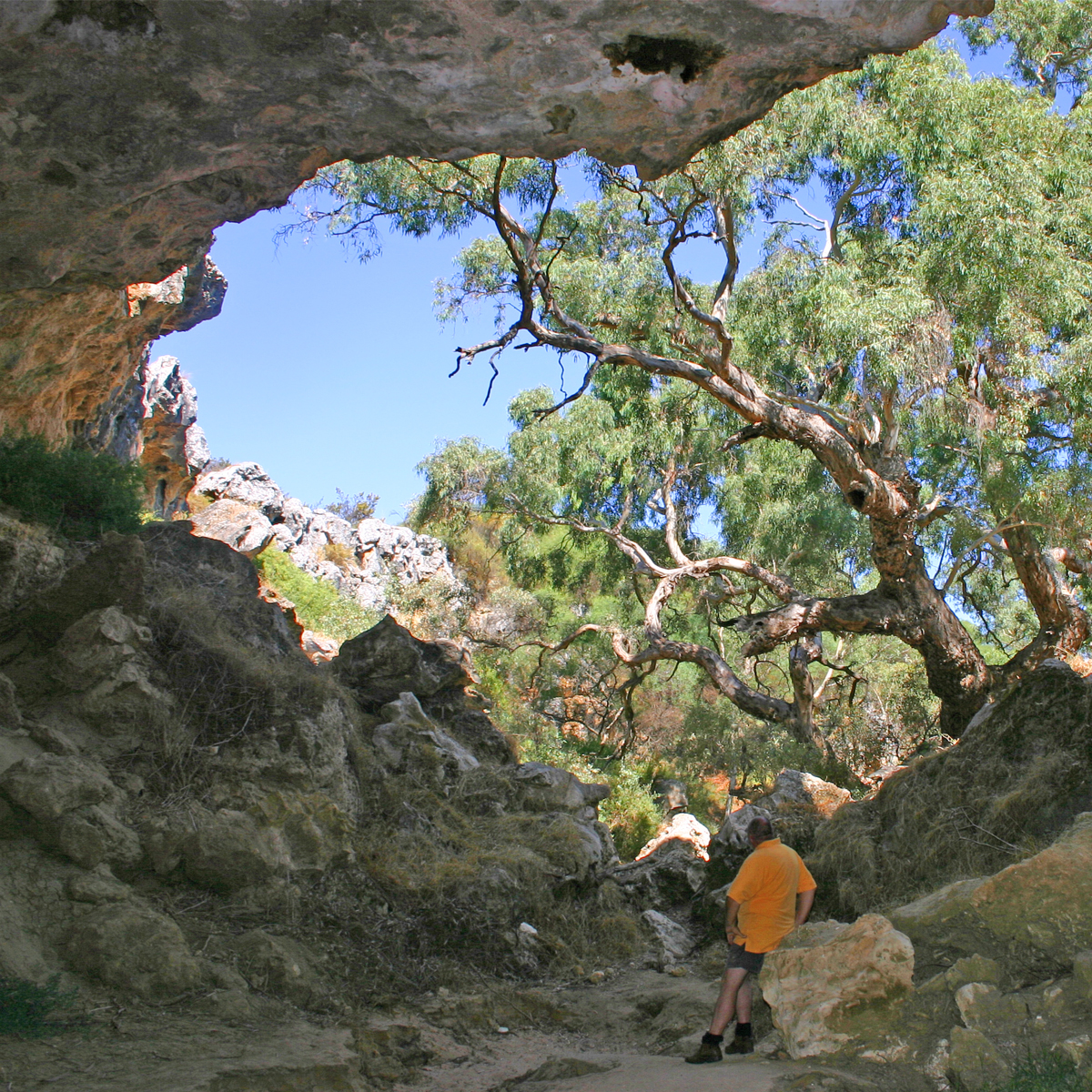 The fishing settlement of Cervantes was declared a townsite in 1963. It is named after the islands visible immediately offshore, the scene of a shipwreck on 20 July 1844 when the Cervantes, an American whaler, was driven aground there during a violent winter storm. Captain Gibson and the survivors walked 160km southwards down the beach to Fremantle. 125 years later, the wreck was discovered lying in two metres of water on a sandy bottom by local skindiver, Laurie Walsh. Many of the street names in Cervantes are Spanish because of an assumed connection with Spanish author Miguel de Cervantes Saavedra (1547-1616) whose world-famous classic, published in 1605, told the story of the besotted, near-sighted Don Quixote who, with his down-to-earth companion, the faithful Sancho Panza, set out to right the world’s wrongs in knightly combat and amused 15th-century readers by tilting at windmills.

But Cervantes has more to offer than romantic sounding street names. Fishing is a year-round attraction, either from the beach, the groyne, the jetties or offshore around the reefs and islands. Nearby Lake Thetis boasts a 1,200-year-old colony of stromatolites on its shores. Similar bacterial organisms existed 3,000 million years ago which makes them the oldest known form of life still living on earth. The lake is named after the colonial schooner Thetis which, with surveyor Joshua Gregory aboard, carried out the first detailed examination of this section of Western Australia’s coastline in 1847-48. Further south is Nambung National Park, home of the internationally renowned Pinnacles Desert, a weird landscape of unique geological structures. This park takes its name from the equally weird Nambung River, a watercourse that disappears into a cave 5km inland and surfaces offshore. Another feature of the park is the Brockman Tree, an ancient Tuart blazed with the letter ‘B’ in 1855 by Robert Brockman when he took up the first leasehold land in the region.

Hill River was named by explorer Lieutenant George Grey during his epic 1839 march to Perth after his boat was wrecked at Kalbarri. Its course was traversed by surveyor H.S. Carey in 1880. Although not a large watercourse by any means, it is one of only four rivers that reach the coast between Fremantle and Geraldton. The sand bar at the mouth of this river can be extremely soft at times and 4w-drivers are advised to approach it with care.

Jurien on Jurien Bay is the largest settlement on the central west coast. It has a marina and all the amenities one would expect of a prosperous rock lobster fishing town. The waters of the bay, protected by reefs and islands, offer opportunities for boating and aquatic activities including fishing, scuba diving and surfing. The bay was named on 1 July 1801 by the French Scientific Expedition under Captain Nicolas Baudin. It is believed to have been named in honour of the then French naval administrator, Charles Marie, Viscount Jurien (1763-1836). The ships of the French Expedition were the Geographe and the Naturaliste, vessels that gave their names to a bay and a cape nearer the southern extremity of Australia’s western coast. In addition, the early maritime history of Jurien Bay includes visits by Captain Philip Parker King in the brig Bathurst in 1822, Lieutenant William Preston of HMS Sulphur in the hired cutter Colonist in 1830 and Joshua Gregory aboard Thetis in 1847-48. The first hydrographic surveys of the bay were carried out by Fremantle Harbour Master James Harding in 1865 and Mr Butcher, his pilot, the following year. Their work was extended in 1875 by Staff Commander W.E. Archdeacon RN whose survey formed the basis for an Admiralty Chart that remained in use for over a century until Harbour & Lights produced large scale charts for the fishing industry during the 1980s. The townsite was proclaimed as ‘Jurien Bay’ in 1956, with the name being officially shortened to Jurien three years later.

North Head, as the name suggests, is at the northern end of Jurien Bay. During World War Two, when military forces occupied various strategic points along the WA coastline, a radar station was set up on this headland. Concrete bunkers from that time are still in evidence. North Head was the site of a horrifying tragedy in August 1967 when 23-year-old spearfisherman, Bob Bartle was bitten in half by a Great White Shark. A memorial erected by his family and friends is situated on the highest part of the headland. Many of the tracks here have been closed for rejuvenation.

Sandy Cape, once a collection of fishermen’s squatter shacks, is now being developed as a caravan and camping area. Further north, Green Head is a pleasant little townsite boasting a caravan park and all facilities with a totally protected swimming beach at picturesque Dynamite Bay. The scenic coastal land north of the town, including Point Louise, Billygoat Bay, Ti Tree Bay and Little Harbour, has been developed as a tourist recreational area by the Shire of Coorow. All the old squatters’ huts have been cleared away and the area is now accessed by gravelled roads. Parking areas, toilets and shady picnic spots are scattered through the region and all beaches are accessible to 4WDs. A no-camping rule applies, but this picturesque coastline is within easy reach of town-based caravan parks and camping areas.

The route to Stockyard Gully takes you inland on beekeepers’ tracks through Little Three Springs Nature Reserve, then northwards along Pearsons Track. The gully was a stopping place for drovers on the old northern stock route from the 1850s to the 1880s. Stockyard Gully National Park features several remarkable caves through which the Stockyard Gully watercourse flows and you’ll need torches to follow this winding creek bed underground. The rough limestone outcrops of Banksia-lined Pearsons Track will take you all the way through to the Eneabba-Coolimba Road and Lake Indoon, one of the best camping areas in the region where you get shady trees, BBQs and a breathtaking lake when it has water in it; a great place to stop awhile and reflect on the wonders of our Western Australian coastline.