Mixing the mighty Karri forest with marshy coastal heath, rocky headlands, sand dunes and soft beaches, this trip is ideally suited to a three-day weekend with a Friday night stopover at Pemberton, Northcliffe or a Warren River campsite and Saturday night at Fish Creek, on the beach or at one of the several campsites near Moore’s hut. Our trip notes begin at Pemberton, one of the State’s historic timber towns. 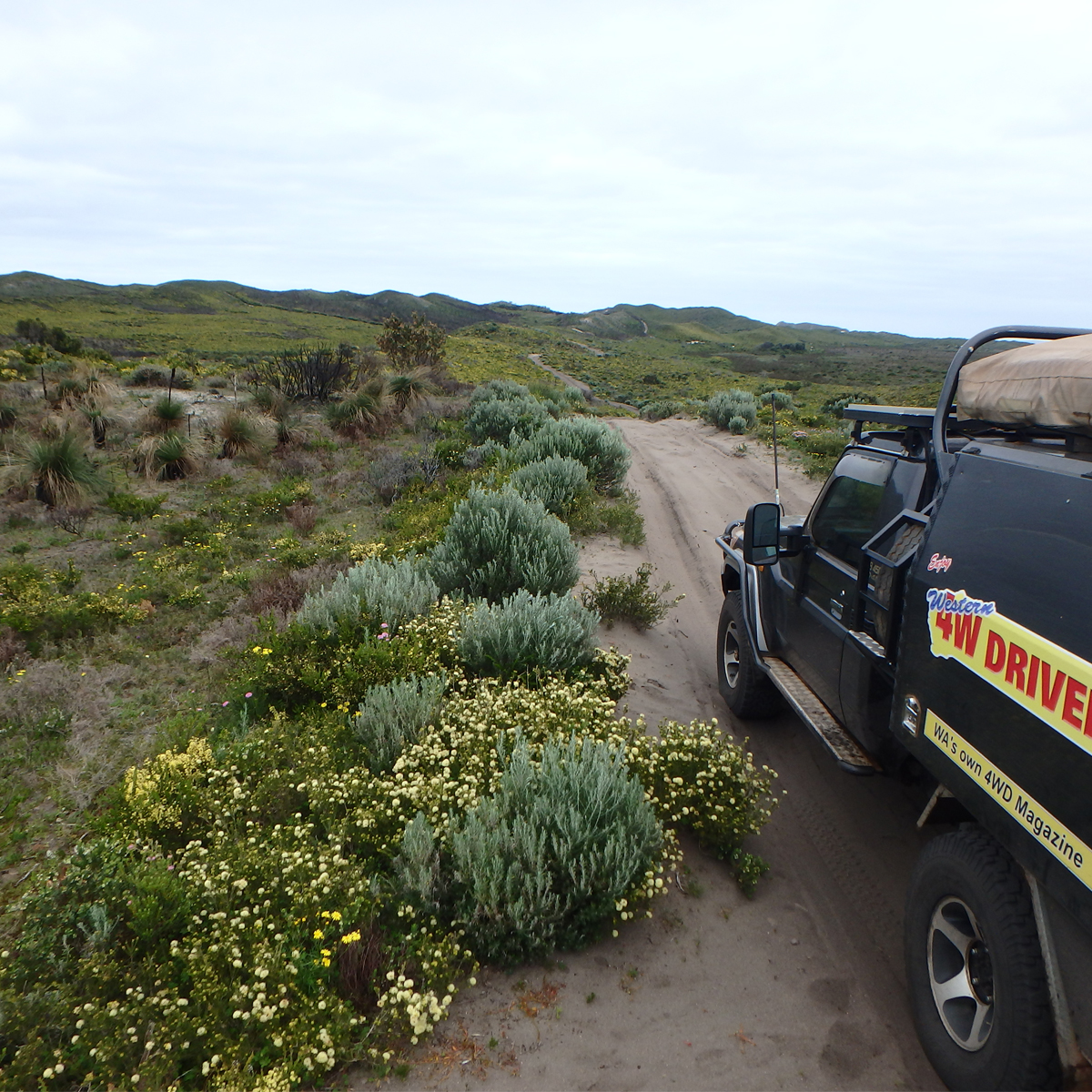 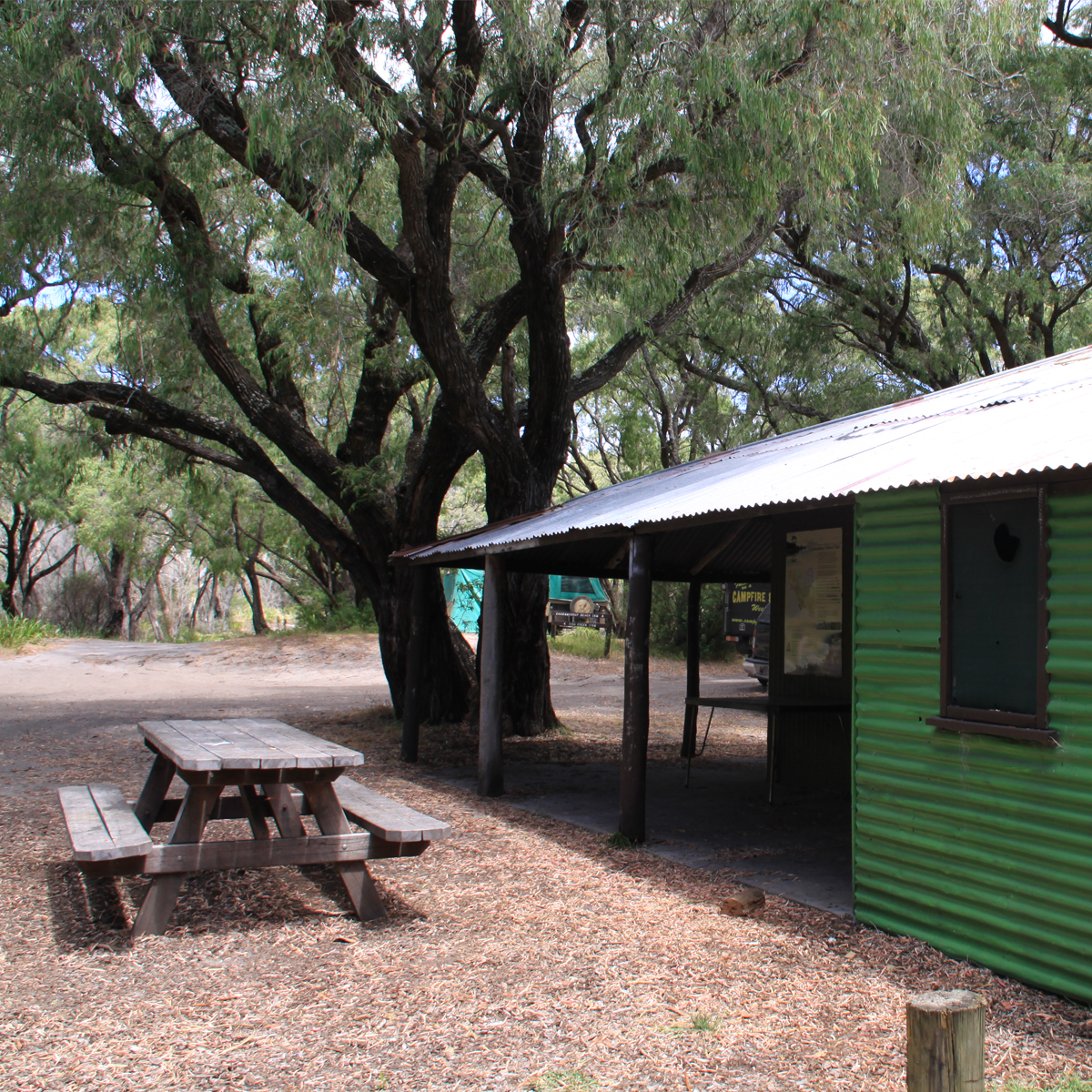 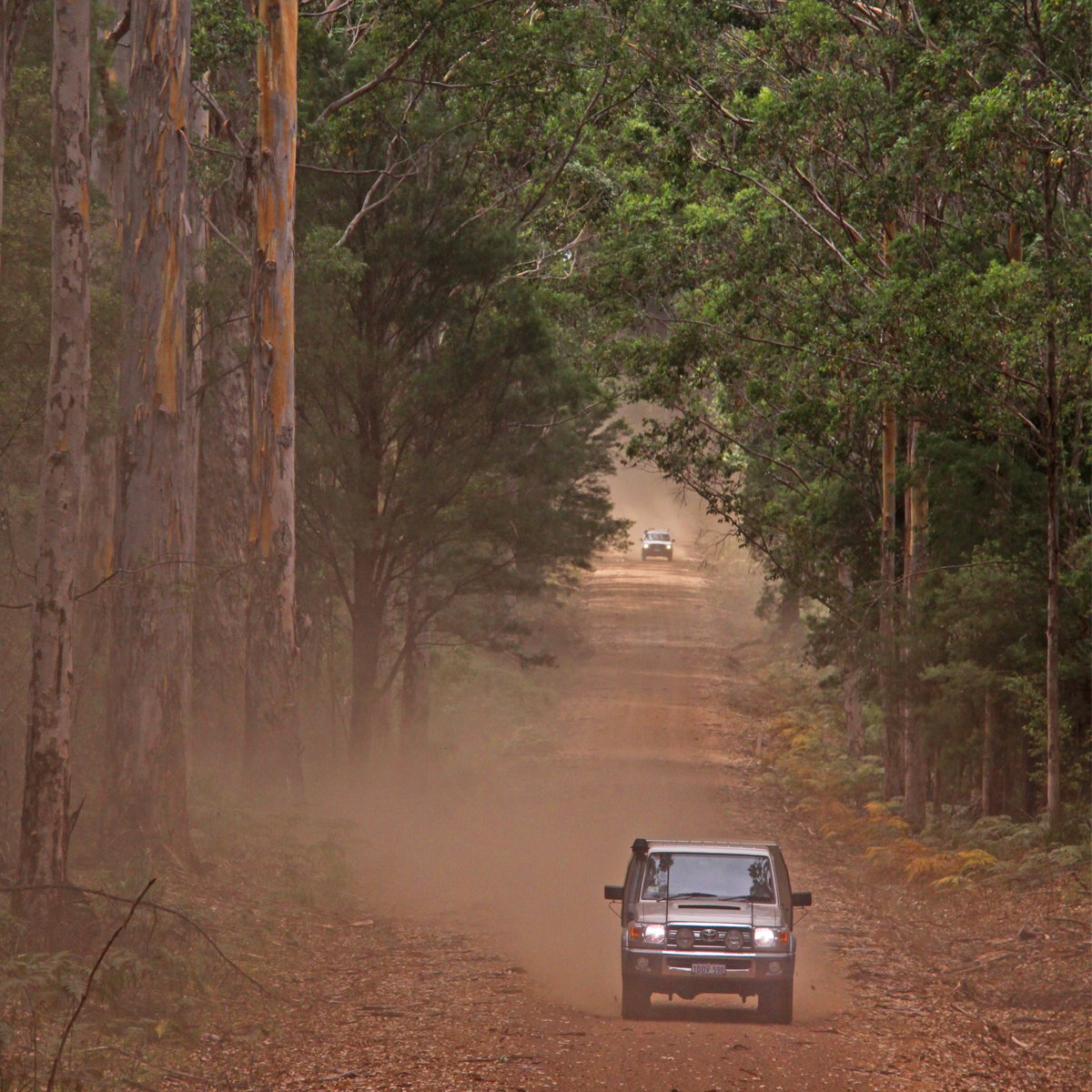 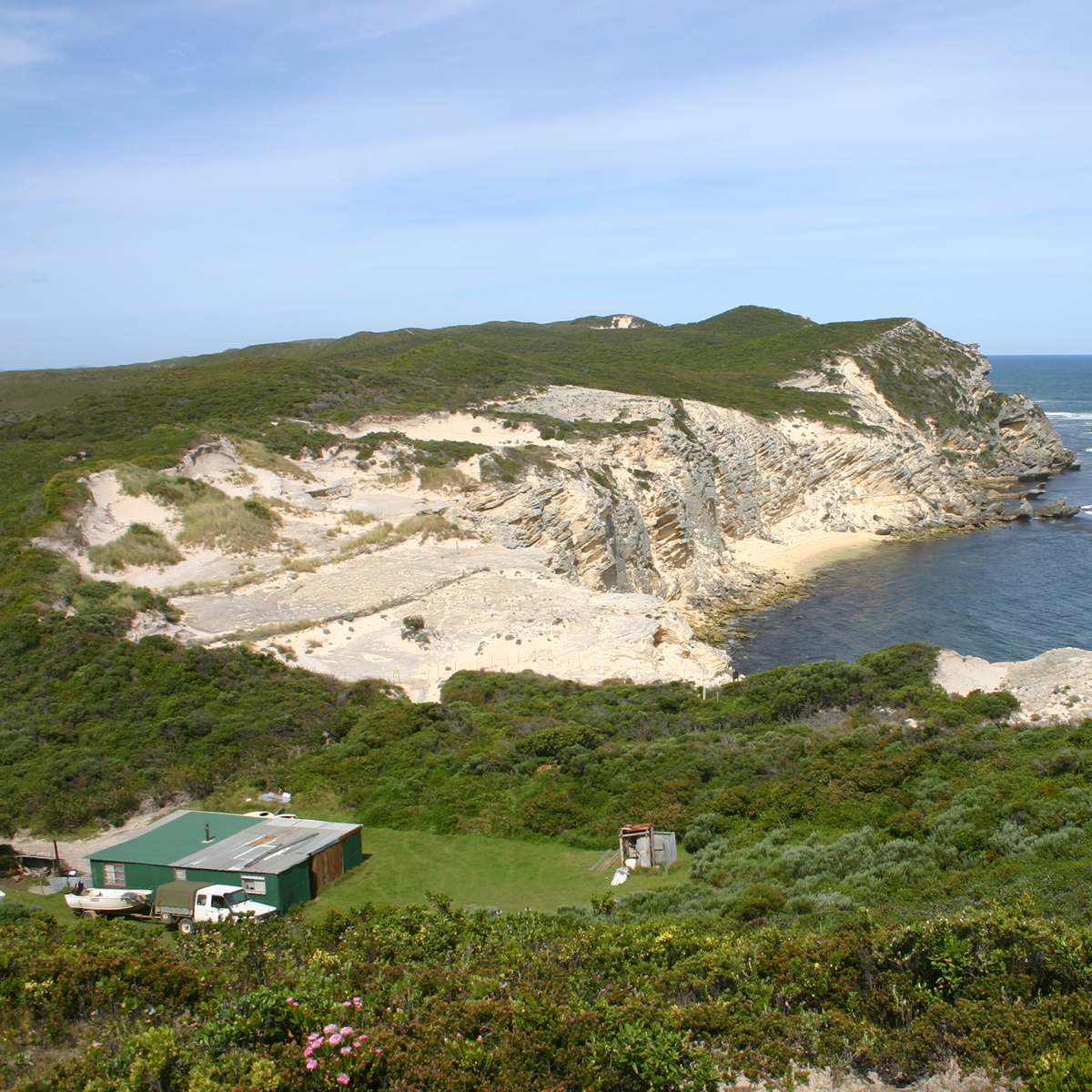 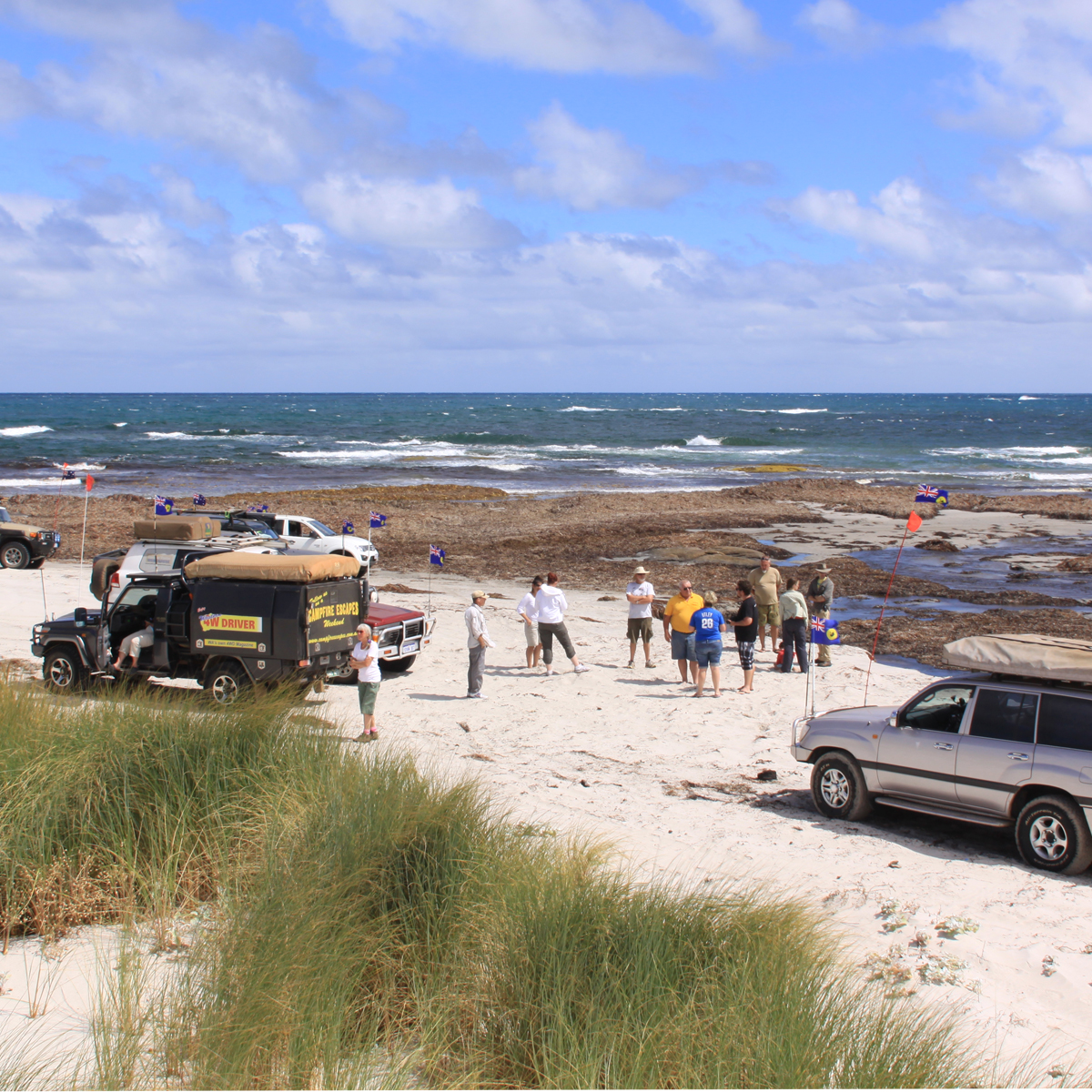 West Cliff Point named by Staff Commander W.E. Archdeacon, a Royal Navy hydrographer who charted sections of WA’s Southern Ocean shores by sail during the latter half of the 1870s, is the limestone point near Fish Creek, long a destination for keen fishermen. It lies west of Broke Inlet at the south-eastern extremity of Coodamurrup Beach and was well-known to locals for its cliff-top steel ladder and near-vertical iron rail tracks allowing a lightweight tinny to be lowered down the rock face to a narrow landlocked strip of sand providing a somewhat sheltered launching and landing spot. These ancient fisher-fabricated marvels are long-gone now, although a trim green shack surrounded by a bright lawn complete with pine tree is still maintained nearby and the place remains a destination for dhufish anglers. It’s a craggy swamp and sand dune surrounded spot that tends to stick in the memory. But there’s more, much more.

The first settler was Pemberton Walcott who developed a small farm there in 1862. Fifty years on Numbers 2 and 3 State Sawmills were established there and an influx of timber workers saw the establishment of the townsite eventually named Pemberton. The Group Settlement Scheme after World War One further expanded the region and, while the early years on their small-holdings were hard, eventually irrigated farming was introduced and potato, cauliflower, tobacco, hops and other crops improved farming returns. In the 1930s the State Government established a fish hatchery that took advantage of fast flowing streams at Pemberton and Rainbow Trout and Redfin Perch were introduced from there to streams all over the South-West. Private fish and marron hatcheries are now prevalent in the district and a variety of other local industries, such as wineries, arts and craft galleries and gourmet outlets all tempt the traveller. Now a pleasant tourist destination with lots to see and do, the place has retained its romantic history. The Pemberton Visitor Centre and nearby cafes are recommended.

From Pemberton our route heads generally south-eastwards through the Warren River National Park and Northcliffe to the coastal heath country that once provided summer grazing for so many early southern farmers. From around the 1870s the coastal lands became important to the pastoralists’ economy. On the early developing farms sheep were generally run on fenced land, thus saving the need for shepherds, whereas mobs of horses and cattle were allowed to range free over open bushland. While horses did fairly well in these conditions, it was noted that cattle gradually became sickly and many died unless they were moved to better pasture in the dry season. Long before this wasting was proved scientifically to be caused by a lack of various trace elements in the South-West soils, it became a widely adopted general practice to muster cattle annually for summer migration to the coast where different natural feeds such as sedge and heath would help them to regain condition.

South-West cattlemen established their own unofficial stock routes. Some pioneered by the Muir family ran between Lake Muir and Nornalup Inlet and from Deeside down to the western side of Broke Inlet (now the Deeside Coast Road). Further west, others ran from Manjimup down to Yeagerup and Northcliffe (now the Wheatley Coast Road) and from Northcliffe the pads fanned out to Windy Harbour and the mouths of the Warren, Meerup and Gardner rivers. At one stage, the whole coastal strip was under leasehold for summer grazing purposes. As early as 1873 Edward Brockman of Warren House south of Pemberton was leasing over 1,700 hectares on the coast , and in 1910 the Brockmans and Andrews fenced three quarters of these lands. Typically, several farmers would combine their mobs, using younger family members or hiring experienced stockmen to complete the drive and watch over the cattle on their southern pastures. In this way, drovers were responsible for the construction of huts and holding yards a few of which are still standing. South coast stockmen used neck straps and bells on cows to help locate the mobs in coastal dunes and bush thickets but intermittent clearing was carried out through some of the thicker stretches, usually by dragging logs through the bush to provide an easier passage for horsemen and cattle. Zamia palms that gave cattle rickets were frequently eradicated by opening them with a crowbar and pouring kerosene into the split and fire was considered a useful tool. Despite this, the bush suffered little. As Bill Ipsen states in his book on south coast droving, Follow that Bell:

‘They lit fires at selected points on a four-year rotation in order to provide feed for their cattle and to prevent catastrophic fires from causing serious long-term damage to the forest. Essentially, in order to provide an abundance of new shoots for cattle feed, they used the same techniques as the Aborigines who burnt patches of country in a circle in order to see and trap game.’

Thomas Muir, who had pioneered Deeside, starting out with only a rush hut there in 1854, knew this region well. He made enquiries of local Noongar people who worked for him and was able to record a few Aboriginal place names that were conveyed to mapmakers in 1907. These include Toororgup and Walbingup at the mouth of the Gardner River and Wainbup about 4km north-east of Fish Creek. Moore’s hut, one of the main destinations of this 4WD jaunt, was built by the Brockman family in 1910. Annual cattle movements continued on the south coast for almost a century until the 1970s when red tape from CALM began to impede access. Eventually the entire coastal area between the Shannon and Gardner rivers was declared as D’Entrecasteaux National Park and 4WD tracks took over from the old well-worn cattle pads.

However, Moore’s hut is still in good shape with pressed tin internal walls and an oak floor salvaged from a ship wreck on Coodamurrup Beach. There are plenty of campsites here and a long drop dunny with a few more campsites alongside the track to the beach. From the beach, it’s about 8km up the coast to the Gardner River mouth then about the same to Windy Harbour. But be warned – the Gardner has been known to eat 4WDs. Our advice is, if you have any doubts about the crossing, give it a miss and follow our trip notes out to the South West Highway. Please note that park passes and camping fees can be paid at Northcliffe Visitors Centre or the DPAW office in Pemberton.

Make sure you let someone know where you are going and when you intend to be home.  Mobile phone coverage should not be relied upon.  This could impact how well Google Maps (or equivalent works) and you should either invest in a good quality GPS unit or ensure you have a map of the area.