From Beermullah West Road, northwards of Gingin, this route skirts the western edge of four important northern sandplain reserves in the Wanneroo and Moora Conservation and Land Management Districts. These include Moore River Nature Reserve, Moore River National Park, Namming Nature Reserve and Eneminga Nature Reserve. The terrain is mostly flat and sandy but the vegetation is incredibly varied. Consisting of Grevillea, Banksia, Eucalyptus, bottlebrush, myrtles and extensive tracts of heath, it provides a spectacular explosion of colour during spring with the track edges glowing with Golden Long-heads. However, travellers at that time of year should be aware that kangaroo tick will be on the move and thirsting for blood. Many people have allergic reactions to tick bites so keep your windows up where vegetation encroaches on the track, and take extra care when out bushwalking. 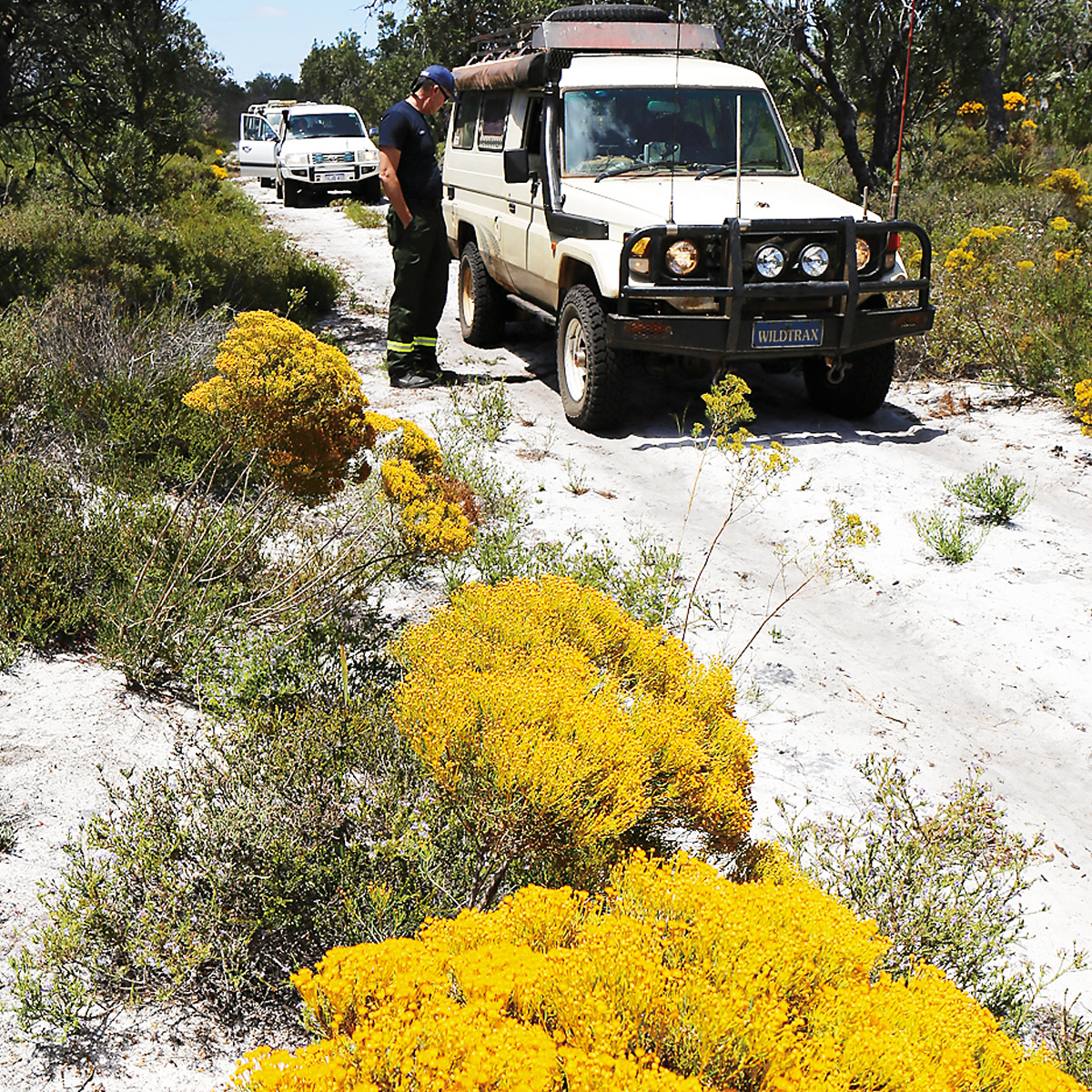 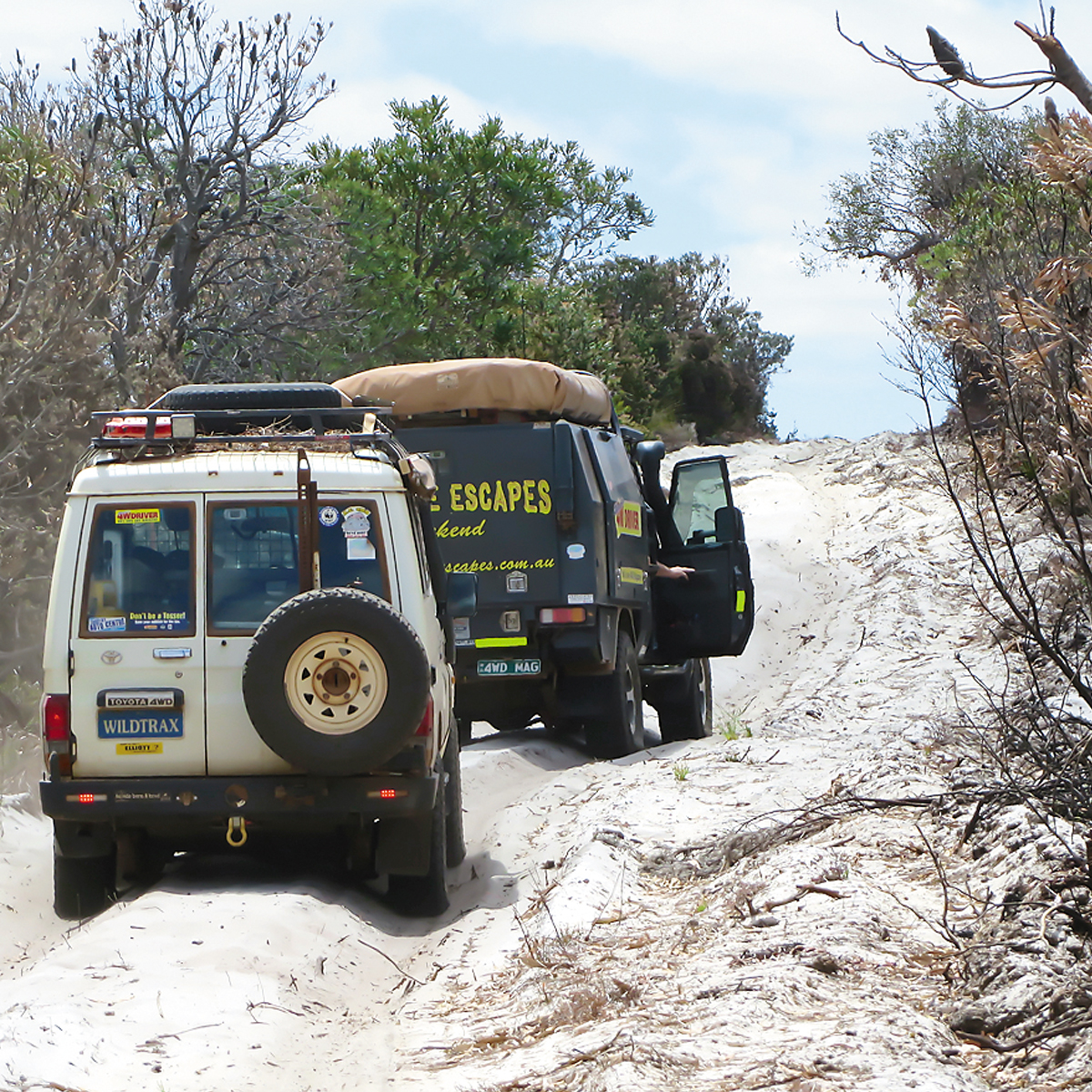 The first European explorer through this region was George Fletcher Moore who traced the course of the Moore River, known as Garban to the Aborigines, in May 1836. Three years later, explorer George Grey, on his epic walk to Perth after his boat was wrecked near Kalbarri, crossed the river at Cowalla Pool in the vicinity of present-day Cowalla Bridge. Surveyor General John Septimus Roe also passed nearby in 1839 during his desperate search for the remnants of Grey’s party who were straggling down the beach in the vicinity of Lancelin.

It should be noted that, in the main, the trip-noted route deliberately keeps to the extreme edge of most nature reserves. There is a very good reason for this. All four of these reserves are under extreme threat from dieback and DPAW staff need all the help they can get to control these infestations. 4W drivers intending to follow this route are urged to clean their vehicles thoroughly before leaving home. It is also important that no deviations onto other management tracks or firebreaks should be taken unless following specific directions on DPAW signposted detours. Extensive dieback mapping is used for monitoring the extent of the disease and for planning° hygiene and protection strategies.

You can help by becoming educated about dieback, one of the greatest threats to the structure and diversity of our fantastic forests, woodlands and heath country. DPAW officers at the Wanneroo office will be only too happy to advise you of track conditions or of any closures or deviations.

Settlement of the area began in 1850 when George and Edward Whitfield took up a large pastoral lease at Cowalla. They established their farm homestead, originally incorporating a dairy and a water-wheel flour mill, on the fertile left bank of the river where it still stands today, a short distance upstream from the bridge.

Cowalla, purchased by Robert de Burgh in 1858, became one of the stopping places on the ‘Old North Road’, the original stock route to Dongara. Christopher Hough built the bridge over Cowalla Pool in 1908. .

If the pool doesn’t look much today, it’s because it was filled with sand by floodwaters in later years. If you stop for a wander round the river here, it is fascinating to recall that, during World War Two, the Australian Military Forces placed an armed guard on Cowalla Bridge. Very strict precautions were taken to protect it as this was the only all weather crossing of the river between Moora and the coast at the time.

If you want to know more of the history of this region, consider getting hold of Neergabby and The Old North Road from Hesparian Press.

A history of ticks?

The bush terrain covered northwards of Cowalla Bridge gives a good idea of what virgin sandplain country would have been like for pioneer travellers heading for the early settlements of Dongara, Greenough and Geraldton. One of the earliest to map this region in any detail was surveyor Robert Quin in 1864. Like seemingly all of our early explorers and settlers, he left no record concerning any problems he may have experienced with tick, nor any data on how the Aborigines dealt with the little varmints. The absence of such comment suggests that, either tick were not as prevalent in those days (perhaps due to more frequent burning by local hunter gatherers), or Aborigines and explorers were made of sterner stuff than their softer skinned descendants. Like most early surveyors and explorers, Quin enlisted local Aborigines as guides. This is evident from his recording of the Aboriginal names for several singular features that stood out as significant landmarks. The most obvious of these to 4WDrivers following this route was a distinctive tabletop known as Yandin. Look out for Yandin Hill whenever you top a rise. It will keep popping up.

Be aware that ticks are prevalent here and it is a good idea to check yourself over to see if any of the little varmints have decided to make a meal of you.