An 850km round trip from Perth, this is an ideal weekend run through Western Australia’s ‘wheatbelt wonderland’, especially in the Spring when the wildflowers are truly magnificent. Please note that this is not a trip recommended for the Winter months when the terrain around all granite outcrops becomes saturated and extremely treacherous. Because of this, you’ll find access to Nature Reserves may be closed after rains. Starting from the Jacaranda-lined streets of Merredin, the largest commercial centre in the eastern wheatbelt, the trip notes will take you eastwards and northwards through undulating Salmon Gum and Gimlet country. 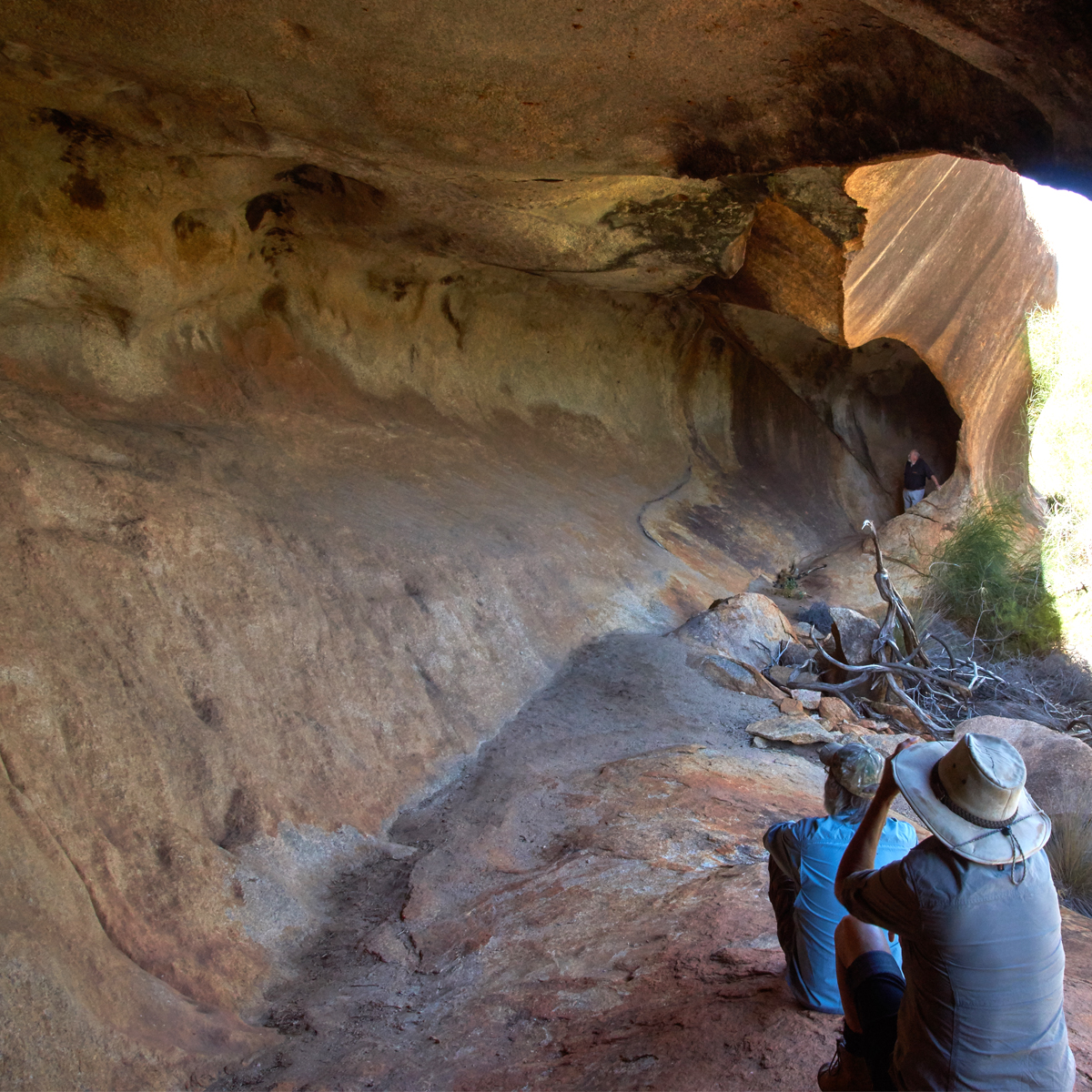 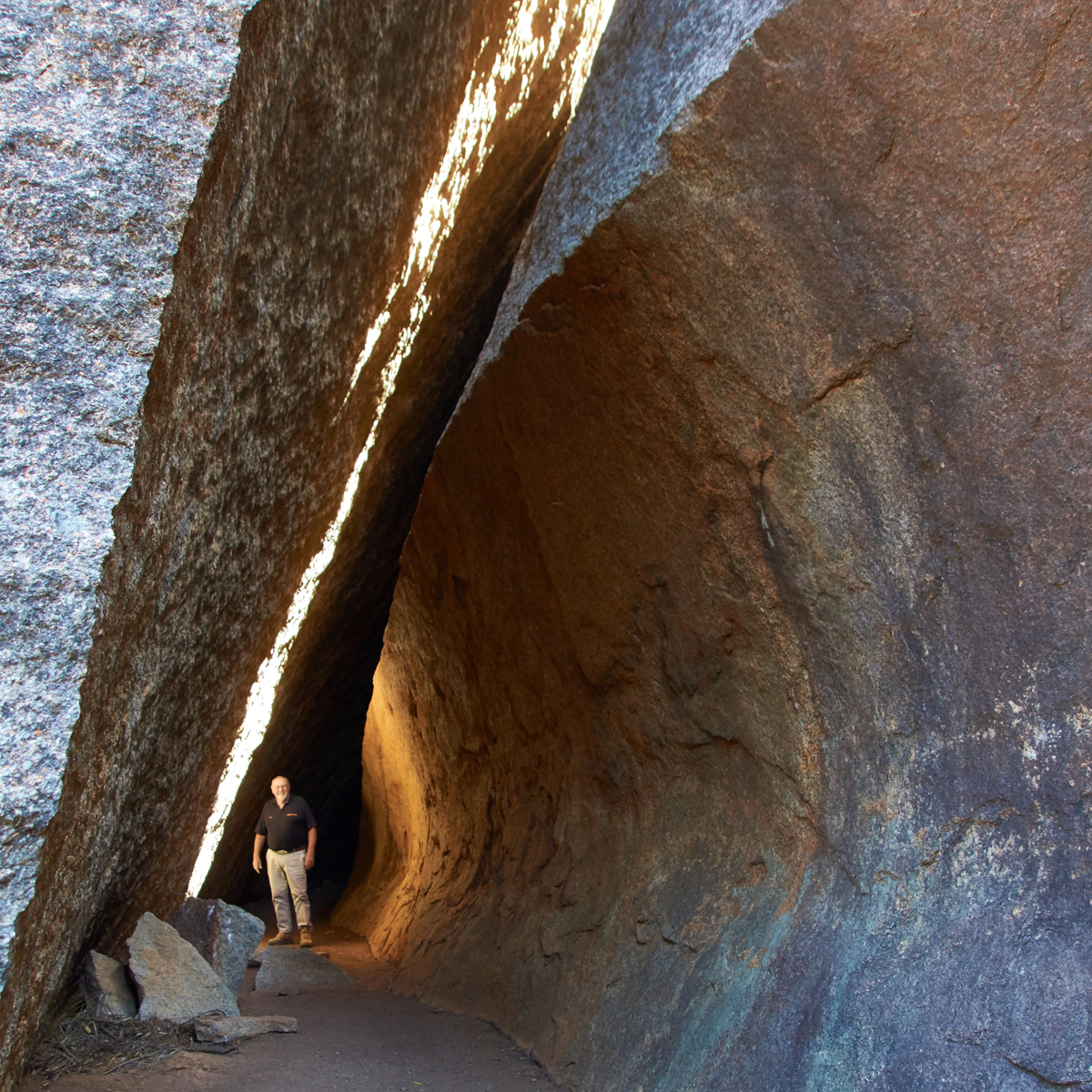 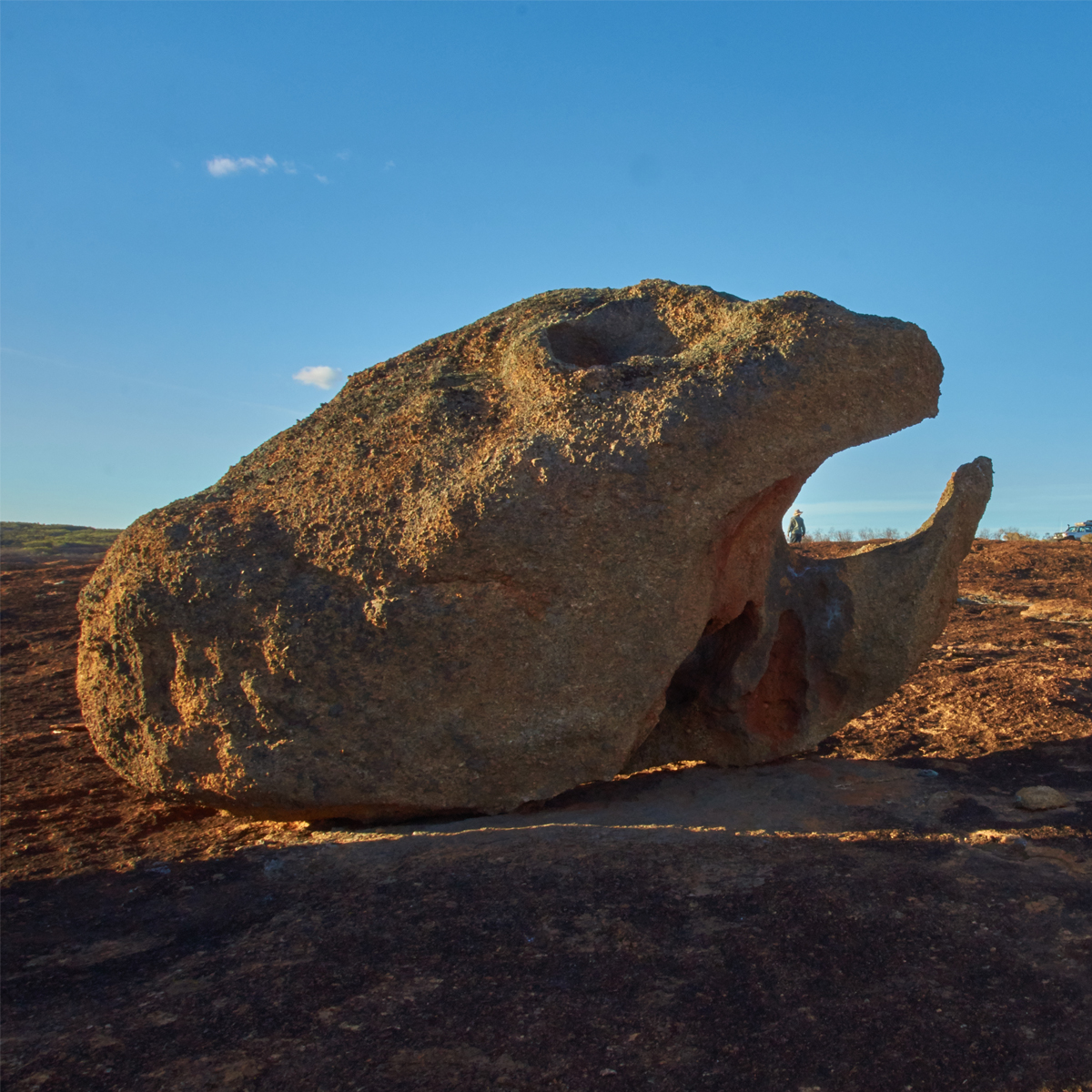 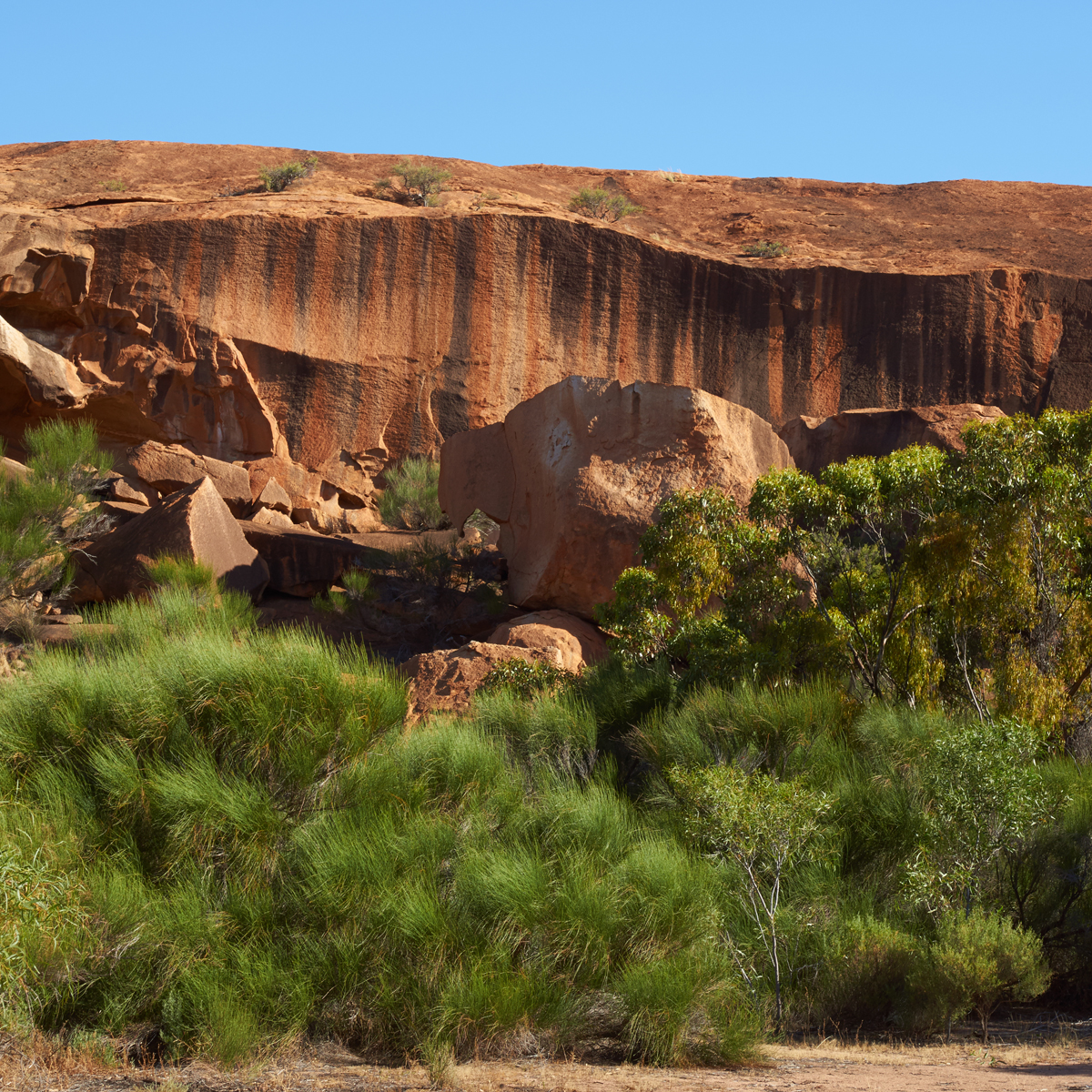 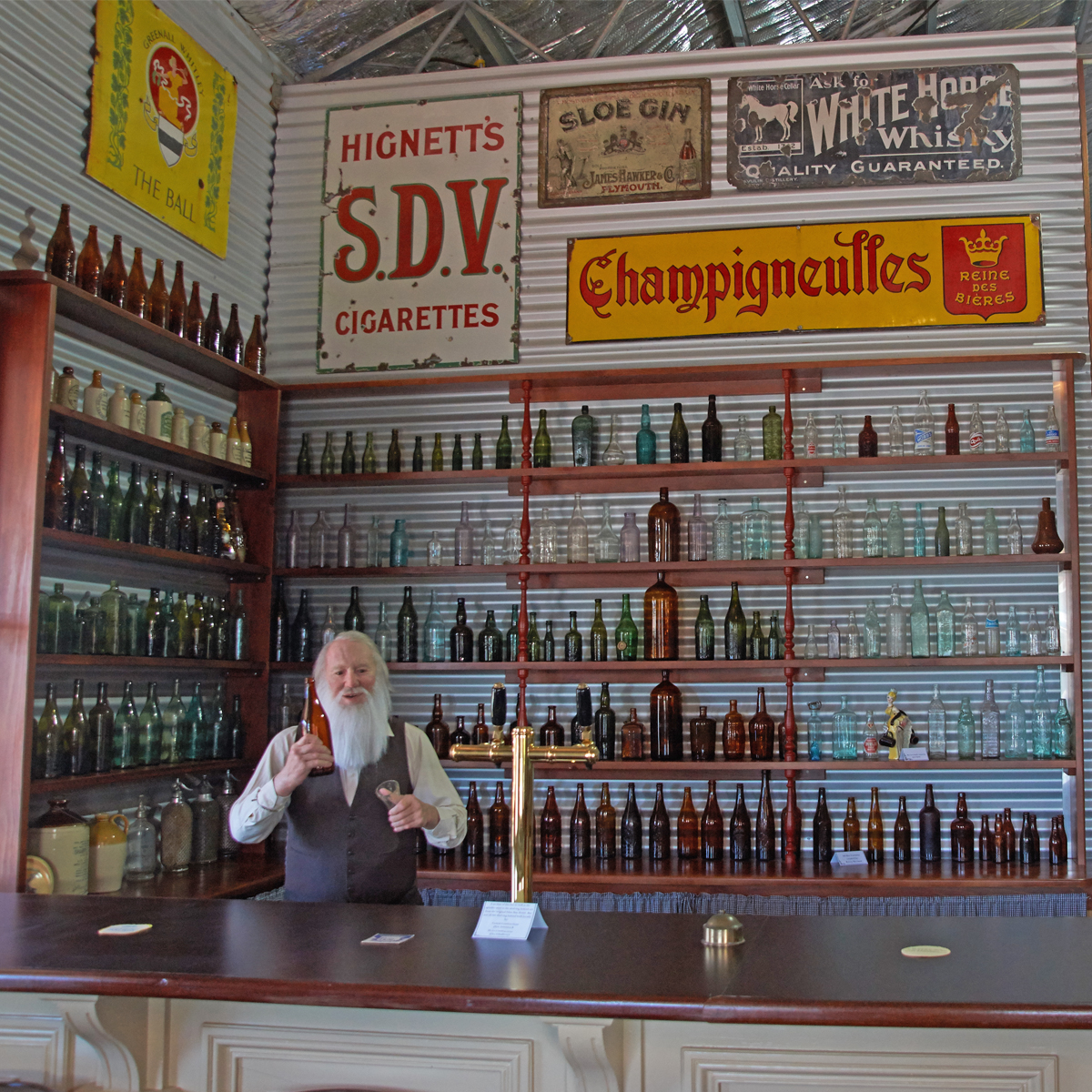 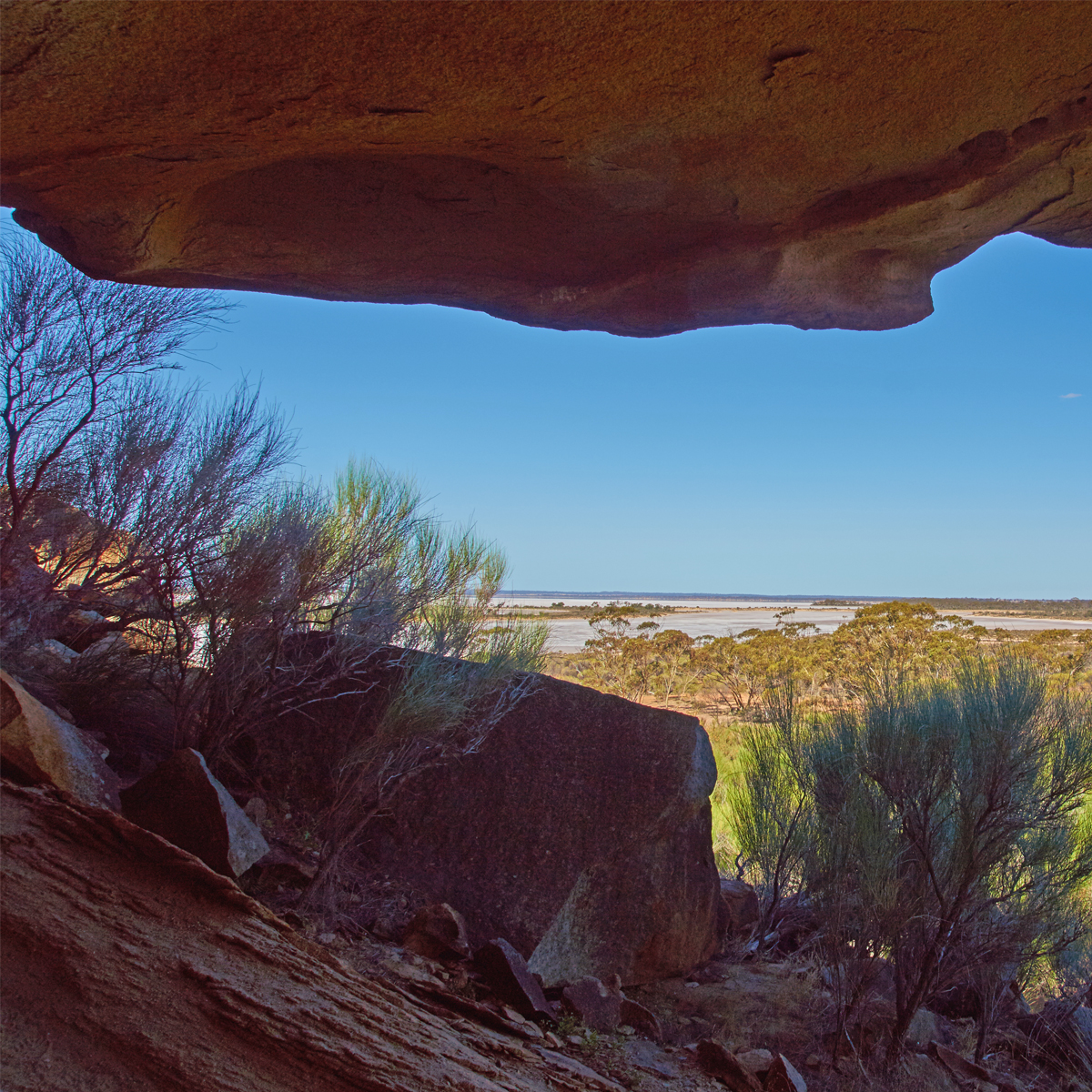 Surveyor General John Septimus Roe ventured into this region in 1836, then his findings were extended by the explorations of the Dempster brothers and Charles Cooke Hunt in the 1860s. Besides the vast tracts of land eventually opened up for farming early in the twentieth century, the most important discoveries made by these early visitors were the many remarkable granites scattered through the region. Invaluable sources of water and stock feed for the explorers, these also formed a lifeline for the original inhabitants, nomadic Aborigines who roamed the area for thousands of years before the coming of the white man. The ancient tribal place names roll off the tongue – Bullarragin, Keokanie, Baladjie, Boodarockin, Warrachuppin, Chiddarcooping, Yanneymooning, Elachbutting. They hint at mystery, at secrets known only to the Kalamaia elders of ages past and the granites retain a fascination for modern day visitors.

You can give yourself more time to explore the granites if you travel through to Merredin on the Friday night. There are several excellent motels and a caravan park for your overnight stay. Merredin itself can repay a little exploration. Fresh bread and great pies are available from the bakery in the main street, and while you’re waiting for that to open, the granite slopes of Merredin Peak on the north-east side of town are worth a look. Run-off from the rock is channelled to a railway dam constructed in the 1890s. Merredin was always an important railway junction as evidenced by the Old Station Museum, also worth a look. In the early days, water for the steam trains was pumped from the Merredin Peak dam to the water tower with its Kalgoorlie Bitter advertisements, a Merredin landmark and the start of our trip notes.

From Merredin, it’s a straightforward run through to Westonia. An auriferous island set in a sea of farming lands, Westonia was by-passed by thousands of prospectors following the rushes to Coolgardie and Kalgoorlie in the 1890s. It wasn’t until 1910 that the area was noticed to be likely looking gold bearing country by Alfred Weston who with his brother did some prospecting there. Their application for a Reward Claim sparked a mini rush and by 1915 Westonia was a busy place. Situated to the north of the township, the main mine was the Edna May after which the local hotel is named. The streets of this quaint little town encompass a mineral theme, reflecting its mining history, and a resurgence in mining activity, combined with the Royalties for Regions program has resulted in an impressive restoration of main street facades with the museum an astounding exhibition for such a tiny place. Don’t miss the incredible Hood-Penn colonial bottle collection which is housed there.

North-east of Westonia lies the Sanford Rock Nature Reserve. There is a picnic site at the foot of this vast granite outcrop, which is surrounded by spectacular wildflowers in the season. The rock is named after surveyor Henry Sanford King who mapped the region during the 1880s. Its Aboriginal name was recorded as ‘Yorkarakine’ by Hunt when he camped there in 1864, but in the 1950s Geographic Names authorities considered this to duplicate the similar sounding Yorkrakine Hill situated about 120km further west and advocated the change.

The next major rock is Baladjie, referred to as ‘Mount Hardey’ by the Dempster brothers during their explorations in July 1861. Hunt recorded the Aboriginal name when he camped there four years later and it is the latter that has been applied to both the rock and the salt lake extending from its eastern foot. Baladjie, a high granite pocked with shallow wind-sculpted caves, was used as a trig station by H.S. King during his extensive surveys in 1889 and his cairn at the summit is a beauty. The best spot for a shady lunch stop is away around the north side of the rock where you’ll find a car park beneath tall Salmon Gums.

After your stop at Baladjie Rock, the trip notes lead westwards to Chiddarcooping Nature Reserve, an extensive series of granites interspersed with thick scrubland. Watch out for the emus and kangaroos that thrive in this Nature Reserve. There are places here where exploration on foot will repay you with some interesting formations and striking views.  On the northern edge of the reserve, along Morrison Road, you’ll find an interesting little creek rising in a rare patch of breakaway country.

Up Echo Valley Road, northwards of Chiddarcooping is Yanneymooning (pronounced ‘Yanni-monning’ by locals). The rock at Yanneymooning is 2km in length and glows a fiery orange in the late afternoon sunlight. The bush around its south west end is usually alive with chattering birds, including the delightful red-capped robin. Close to the base of the rock the scrub can be impenetrable in places, but there are sufficient gaps to facilitate access to the high granite slopes above. Away up on the rock, hidden in protected hollows, grow rare mallee trees, Eucalyptus caesia or Gunguru. An attractive and popular flowering garden tree, only seven natural populations of this plant are known, less than 1,000 occurring in the wild. These native plants are protected as a seed source for the many thousands propagated in nurseries. Yanneymooning Well, surrounded by bottlebrush, is located on the south side of Elachbutting Road about 2km west of the rock.

The next granite mentioned on the trip notes, Elachbutting Rock, has everything. Since our first edition, a local group has made many improvements at this rock and the access track is now sensibly one-way from the northern end clockwise around the outcrop. Walk trails lead to some spectacular spots. Near the north end is a wave formation reminiscent of Hyden’s famous tourist attraction, though much smaller, then ‘Montys Pass’, an awesome 50 metre walk-through beneath an immense slab that has slipped from the steep slopes above. A little further around the base is a cavern with fascinating acoustic qualities. Stand at one end and stamp your foot and you get about six echoes thudding back, like being inside a base drum. On the north-eastern side of the rock are a series of delightful campsites amongst yellow-blossomed wattles and shady eucalypts, with an ancient stone well in good repair. A 4WD track winds up to a vantage point with magnificent views of the surrounding farmlands. Walk about 200 metres north-eastward over the top of the rock and you’ll find surveyor King’s cairn, looking somewhat the worse for wear after more than 100 years of weathering the elements.

Leaving Elachbutting with its screeching mobs of Galahs, chattering flocks of Port Lincoln Parrots and breathtaking wildflowers, the trip notes head for home via some interesting sections of road. Intrigued by the name Elsewhere Road, we were told that it was named after a local farm, the owners having chosen to live at ‘Elsewhere’ because in their experience, weather reports invariably finished by stating ‘elsewhere fine’. RPF Road follows the original No. 1 Rabbit Proof Fence surveyed by A.W. Canning five years before his better-known stock route survey. At 1,800km from ocean to ocean, it was ‘the longest fence in the world’, the title of Frank Broomhall’s book published some years ago by Hesperian Press. The book tells the story of Canning’s remarkable bushmanship, of the teams of boundary riders who maintained the fence (old Frank was one of them), and of the strange collection of characters who travelled its length including author, Arthur Upfield (inventor of the fictional half caste detective, ‘Boney’), and the campfire killer, Snowy Rowles, and his victims.

On the shores of Lake Brown, you’ll visit yet another spectacular granite outcrop. Eaglestone Hill, named by John Septimus Roe in 1836, before proceeding out to the Nungarin-Wyalkatchem Road via McCorry’s Old Hotel.