At around 750km, Perth to Perth, this trip may seem like a feasible two day prospect, especially if you get away early, nipping down to Busselton (now only a couple of  hours from Perth using the new Forrest Highway).

However, what with the slow going on some of the subsequent tricky 4w-driving sections and irresistible stops at the many beautiful fishing, swimming, snorkelling, scuba diving and surfing spots, this is one trip you can’t fit into the normal weekend. We had the added worry of a gearbox not holding in first gear and a rock slashed tyre that had to be repaired on the spot because an unnamed tyre company had mounted our spare on an unsuitable rim. Had we made the attempt, we wouldn’t have got back to Perth until the early hours of day three, so save this one for a long weekend. Expect crowds at camping grounds on holiday weekends. My advice is to use your flexitime to create your own long weekend, or slot these trip notes into a much longer stay in the fabulous Augusta-Margaret River region.

Please note that you can purchase this and 17 more great day trips out of Perth in 4WD Weekends out of Perth. 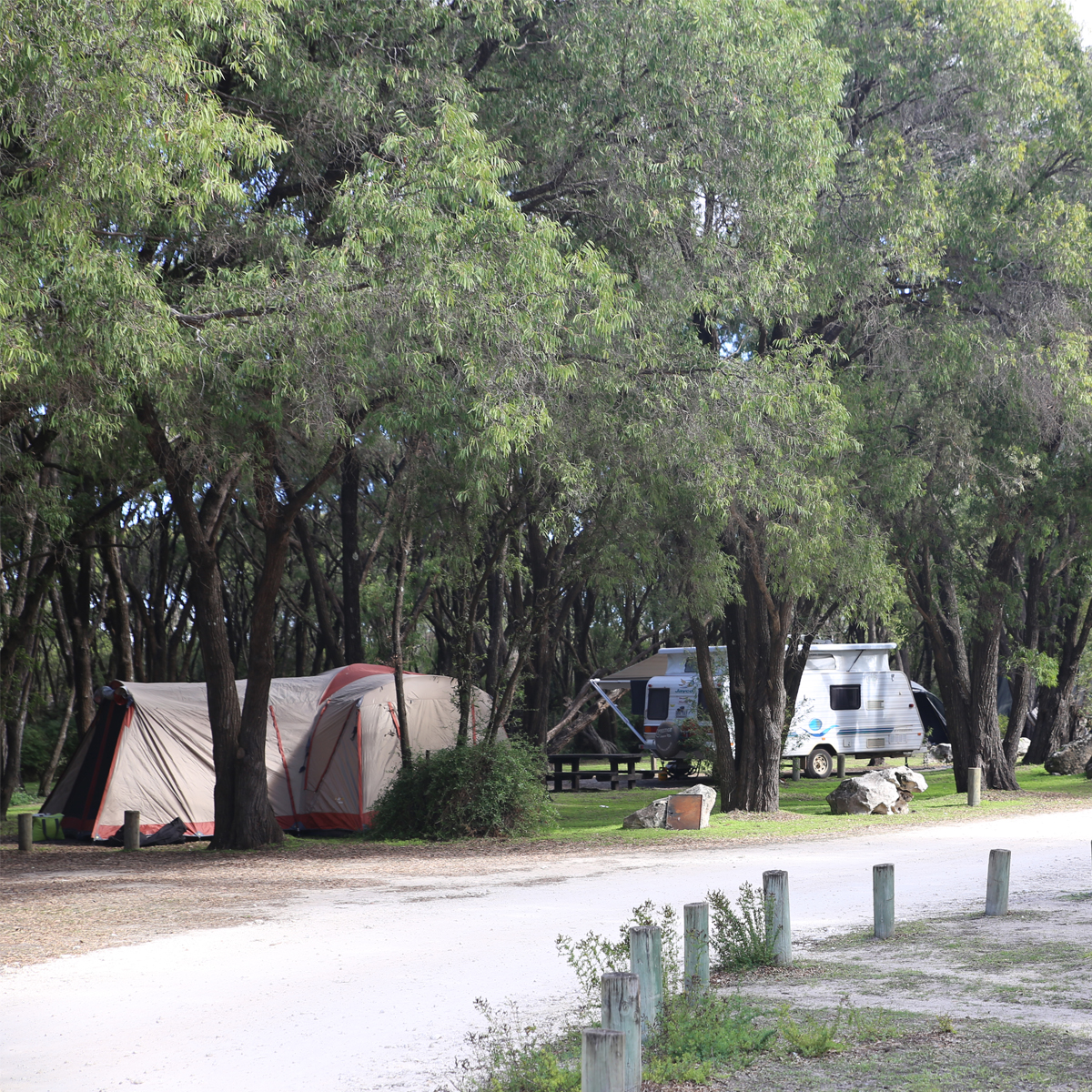 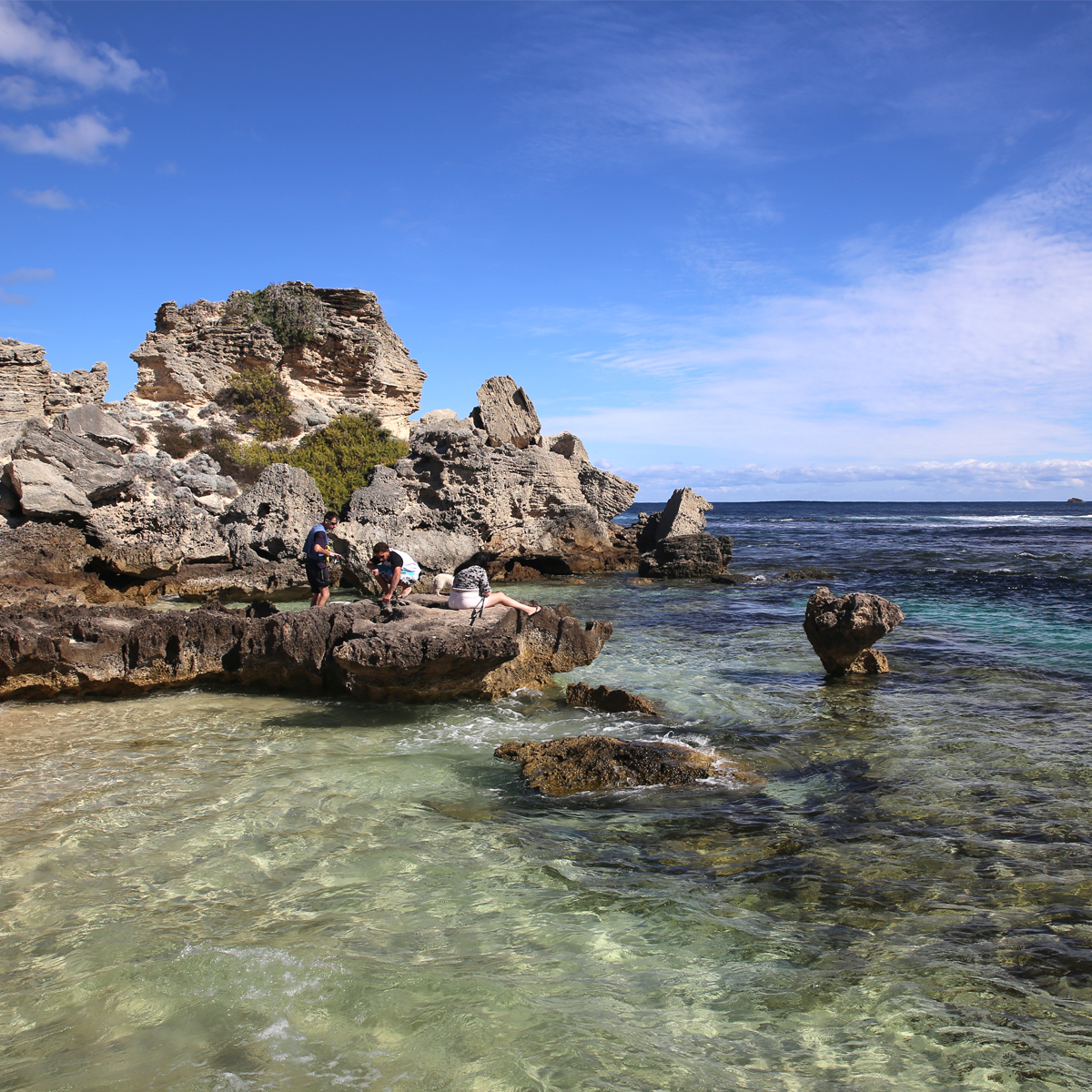 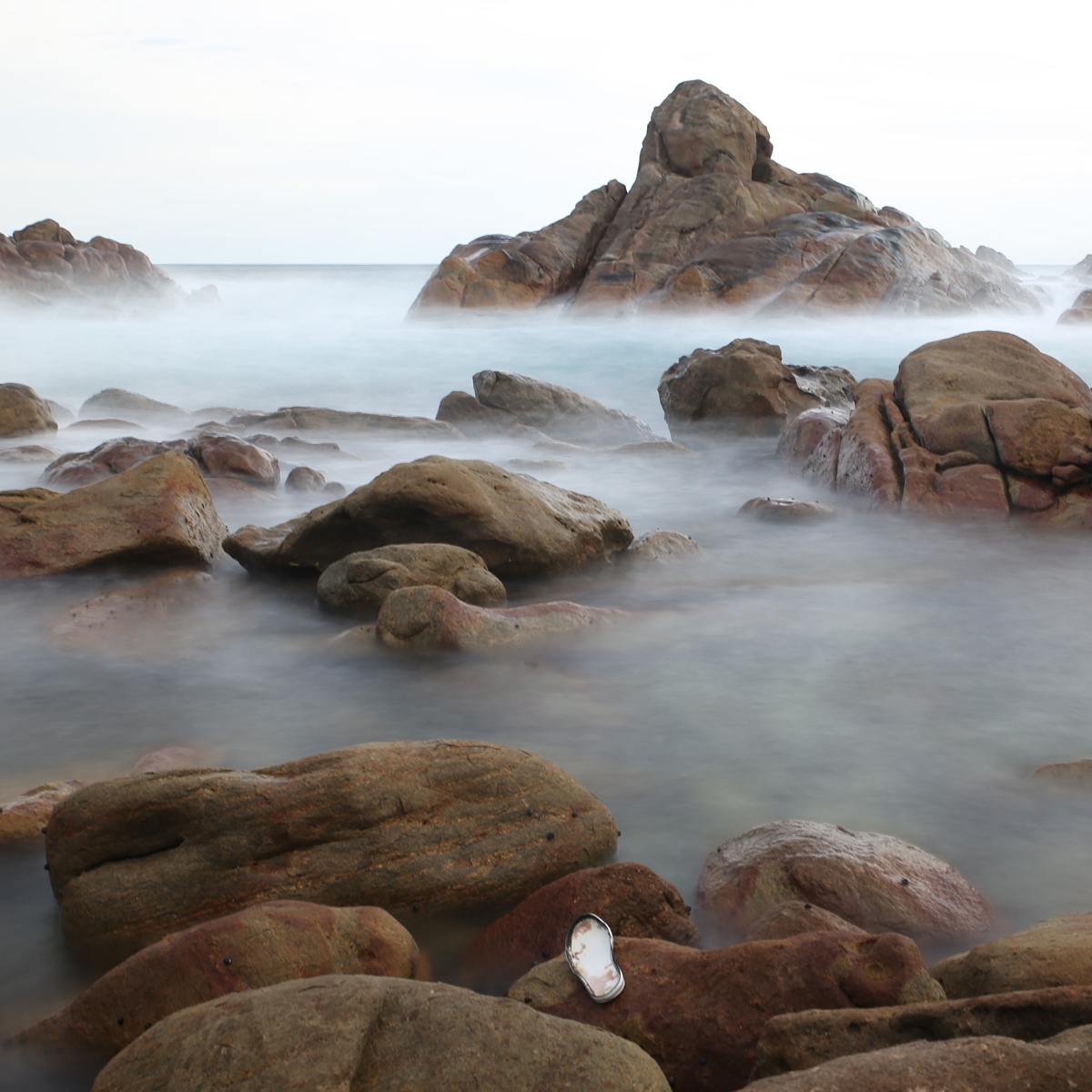 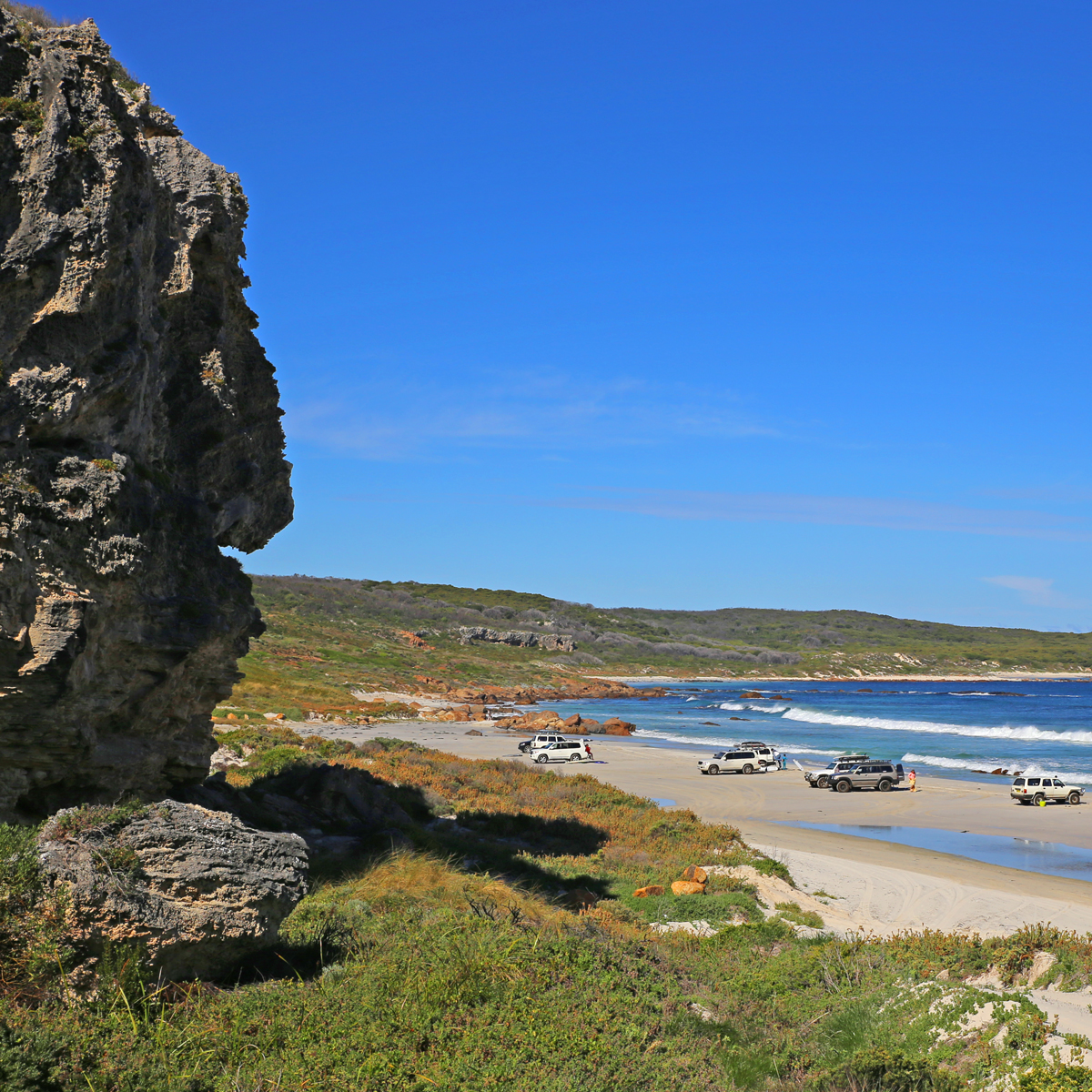 If you are into a longer stopover, you’ll also have time to visit some of the better-known tourist destinations on this incredibly rugged and picturesque shoreline, the places where you won’t require that extra diff. The whole area is extremely well serviced with camping grounds, caravan parks, hotels, motels, guest houses, backpackers’ digs and some great farm and vineyard stays. Local tourist bureaux or the RAC will provide a wealth of advice on the smorgasbord of accommodation available and you can choose to suit your tastes and pocket.

The general route taken is based on Caves Road between Dunsborough and Augusta, two of our South-West’s most popular holiday resorts. The trip notes provide directions that will enable you to get off the honeymooners’ scenic drive and down to the coast at five or six places inaccessible to conventional cars. The seacoast you’ll be visiting stretches between Cape Naturaliste, named by the French expedition of 1801-03 after one of their ships (the other was the Geographe from which Geographe Bay takes its name), and Cape Leeuwin. The latter was named by Matthew Flinders in December 1801 after the Dutch vessel that had first rounded this south-west corner of the continent in March 1622. Both capes are equipped with substantial lighthouses that are popular tourist attractions. The capes are instantly recognisable on any map of Australia and the coastline that connects them consists of superb beaches interspersed with granite promontories, rocks and islets. The fishing is excellent and the surf can be world class at times.

Access to Cape Naturaliste and surrounding tourist attractions such as Bunker Bay and Canal Rocks is via 2WD roads but there are many walking paths meandering around the rugged cape. After returning to Dunsborough, Caves Road will take you south past Ngilgi Cave to Yallingup, one of Western Australia’s best-known surfing spots. Yallingup Beach is pounded by huge waves most days of the year, an attraction that has made it the location for the annual Australian Surfing Championships and many local surfing competitions. Long before surfing became a popular pastime, Caves House, originally a State Hotel, opened in 1903 when the WA government recognised the tourist potential of nearby Yallingup Cave and others in the vicinity.

Wilyabrup Beach and Miamup, in comparison with ‘Bears’, have no facilities other than places to park and lots of beach. The tracks down to these car parks are rutted and have some steep sections, but nothing to worry the average 4WD. These spots too, are popular with surfers and anglers.

Cape Mentelle is another feature named by the 1801-03 French Scientific Expedition under Thomas Nicholas Baudin. Like so many features on the Western Australian coast named during that expedition, this promontory situated just north of the mouth of the Margaret River, appears to have been named after a prominent French scientist, possibly Edmonde Mentelle (1730-1815), geographer and historian. There is a lookout and 4WD access to the beach for boat launching. Our new route gives you a spectacular round trip through the Leeuwin Naturaliste National Park with some testing driving that may require the shovel here and there to level the track.

After returning once again to Caves Road and continuing southwards, you pass turn-offs to Calgardup Cave and Mammoth Cave before turning off on Conto Road to access the Point Road camping area, a pleasant spot with toilets and BBQ pits.

From the Point Road campground, you continue southward on Georgette Road. This road is no doubt named after the steamer wrecked off the coast here in 1878, from which survivors were plucked from the surf by one of Western Australia’s heroines on horse back, Grace Bussell, and her servant, Sam Isaacs. Grace Bussell’s name is commemorated in the coastal resort of Gracetown. Surveyor-explorer Fred Brockman was so impressed with her pluck he made a point of travelling down the coast especially to meet her. The two were married not long afterwards and one of Brockman’s surveyor friends later named Lake Grace after her. The Georgette was the same ship that had almost caused an international incident two years before she went down. Commandeered by the Fremantle water police and with a twelve pound field gun mounted on her deck, she had pursued and fired across the bows of the Catalpa, an American whaling ship assisting in the escape of a group of Irish convicts from the Western Australian penal colony. The American captain had pointed to his flag and sailed on and, fortunately, the affair had fizzled out in an anti-climax. See, even road names can be fascinating if you can fathom their origins.

Boranup Beach is a magnificent expanse of white sand and clear blue island protected sea sweeping up from Hamelin Bay to the rocky and superbly picturesque North Point. This impressive scenery and the sight of fish practically jumping onto campers’ lines should have made our tyre repair job on a nest of sergeant ants easier, but somehow it didn’t help. Thanks to the kind folk who commiserated and gave us a much needed cold drink. Vehicle access to the beach is via Bobs Track, 2.66km south of Boranup Drive.

Regaining Caves Road with all 4w-driving behind you, the remainder of the trip notes will take you past the Hamelin Bay and Cozy Corner turn-offs (both places well worth a visit with beach access possible south of the latter spot) and past the justifiably famous Jewel Cave and the lesser-known Moondyne Cave. Yes, the latter speleological splendour is named after Western Australia’s beloved bushranger, the ubiquitous Moondyne Joe. Why? Well, he actually discovered this particular cave when he worked at nearby Karridale in the 1880s. From this point, it’s a short hop to Augusta, the third oldest settlement in Western Australia, established in May 1830 and named after Princess Augusta Sophia, second daughter of King George III and Queen Charlotte of England.

Most of the pioneers of Augusta abandoned it early in favour of the Vasse district and it was the timber trade that eventually developed the district when a jetty was built in Flinders Bay. The town is situated on the estuary of the Blackwood River and has become increasingly popular with tourists and retirees alike. In nearby Flinders Bay is a memorial that commemorates one of the world’s largest and most successful whale rescue operations. In July 1968, a school of 114 false killer whales stranded themselves on the beach. A small army of volunteers, labouring ceaselessly for two days and nights in bitterly cold surf, managed to get all but eight of them relaunched and herded out of the bay. No trip to Augusta is complete without a drive around to the Cape Leeuwin lighthouse and the old Water Wheel, one of the South-West’s heritage icons. Fed by a continuous flow of spring water, the wheel originally operated a pump supplying water to the lighthouse keepers’ quarters. Since it ceased that function and stopped turning, minerals in the spring water have petrified the entire wheel.

Make sure you let someone know where you are going and when you intend to be home.  Mobile phone coverage should not be relied upon.  This could impact how well Google Maps (or equivalent works) and you should either invest in a good quality GPS unit or ensure you have a map of the area.