This is one of our longer trips and should preferably be slotted in en route to a longer stay on the south coast where there is an amazing choice of destinations and activities. Most of the tracks used are well maintained forestry roads so the route is eminently suitable for ‘soft-roaders’ that mightn’t have the clearance or low range gears of more traditional 4WDs. 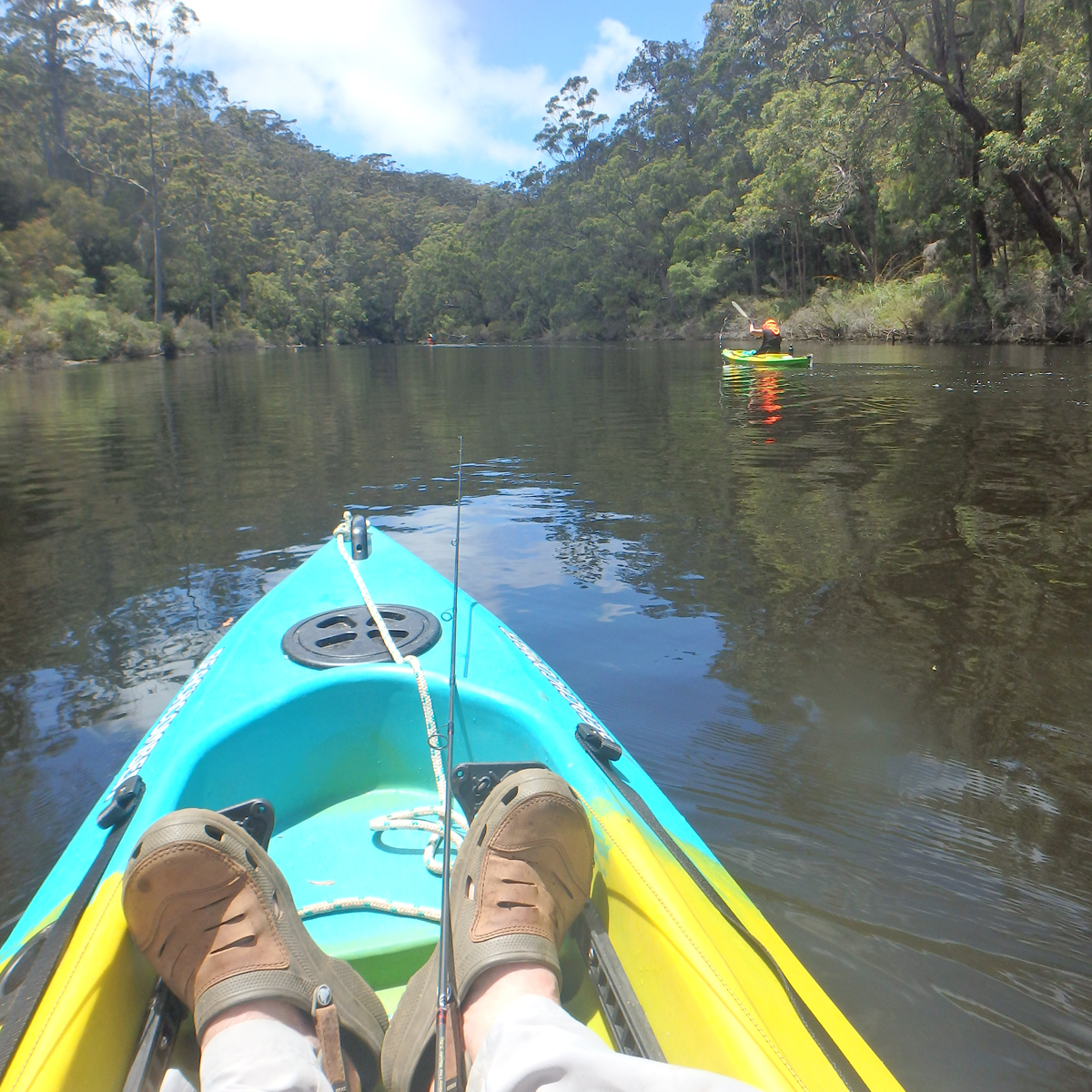 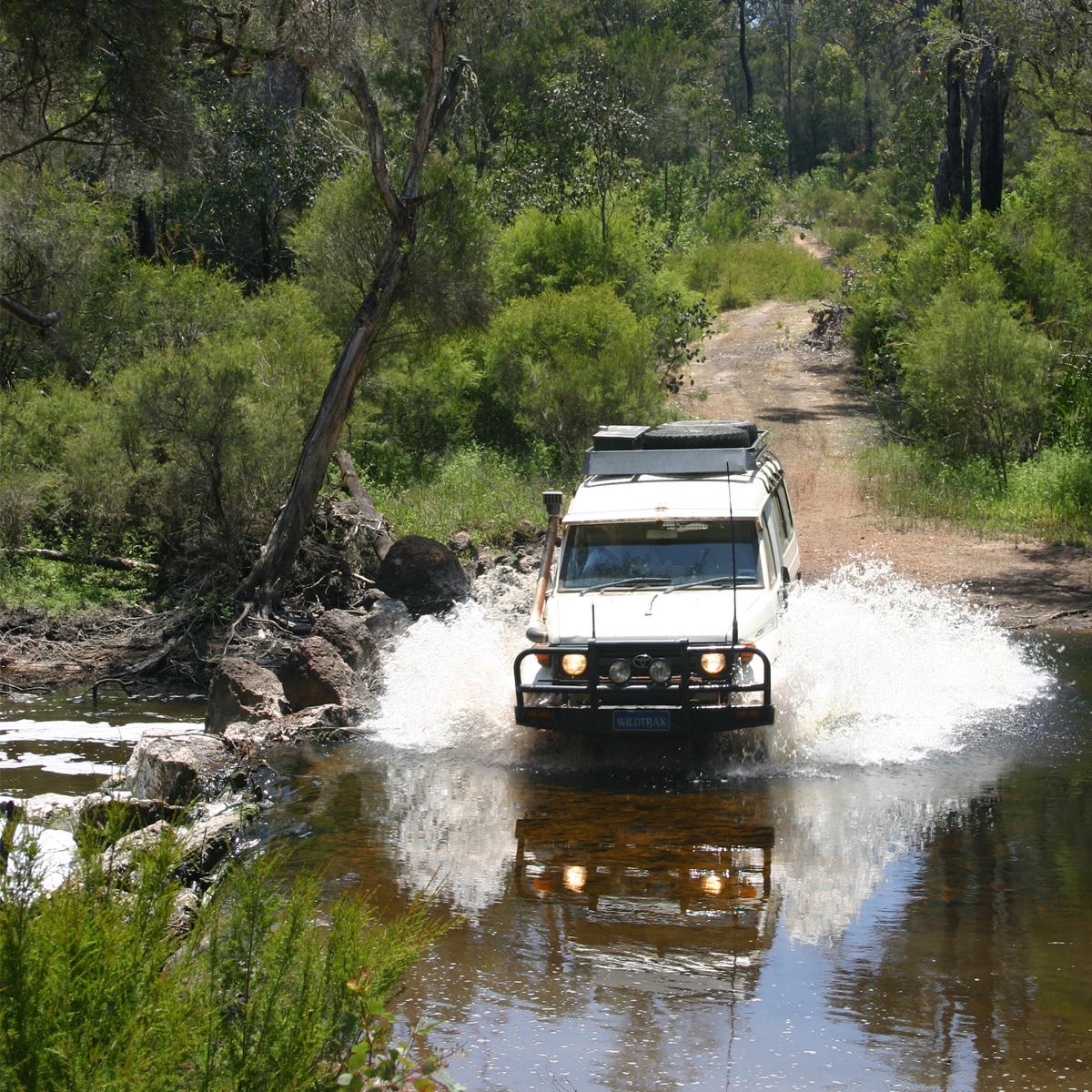 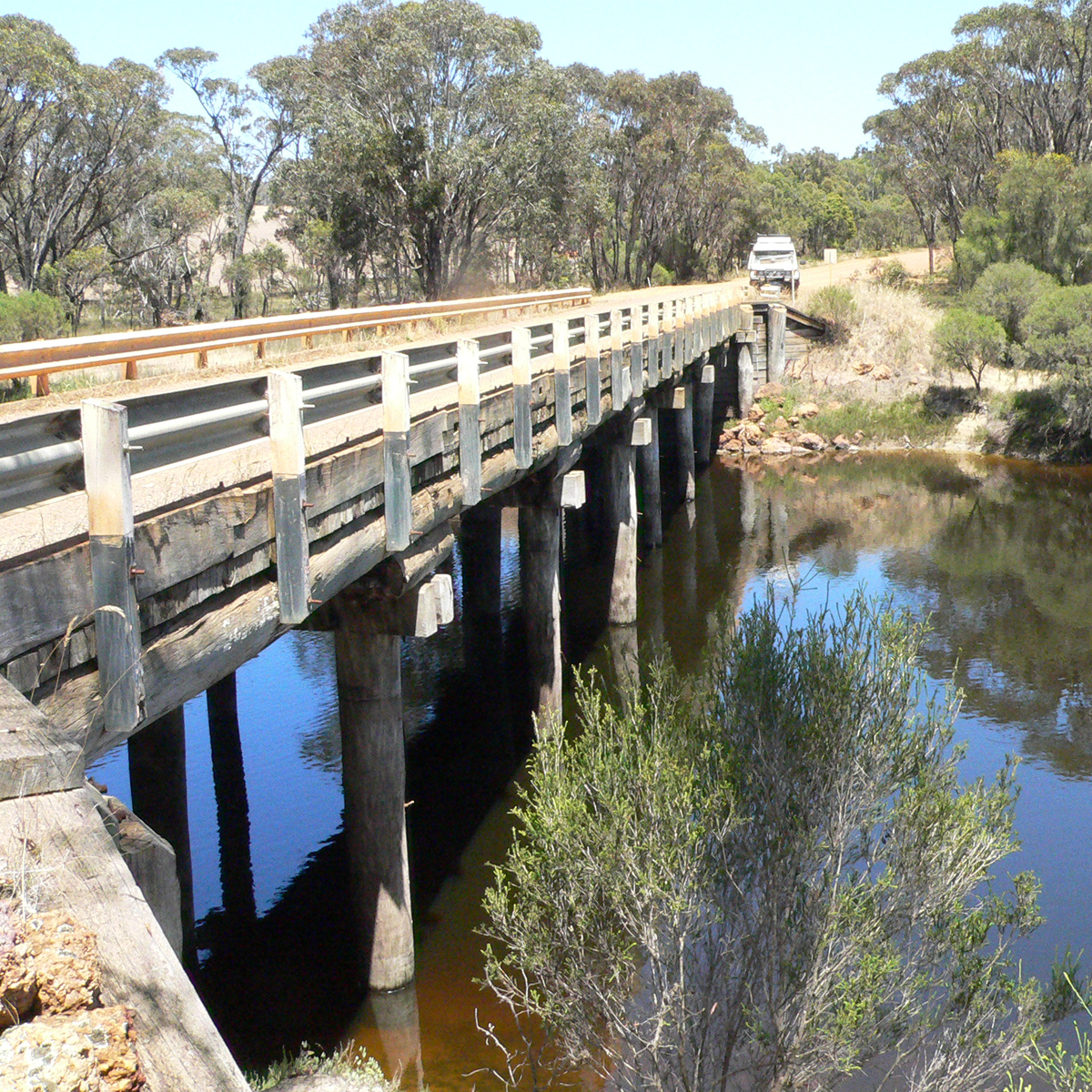 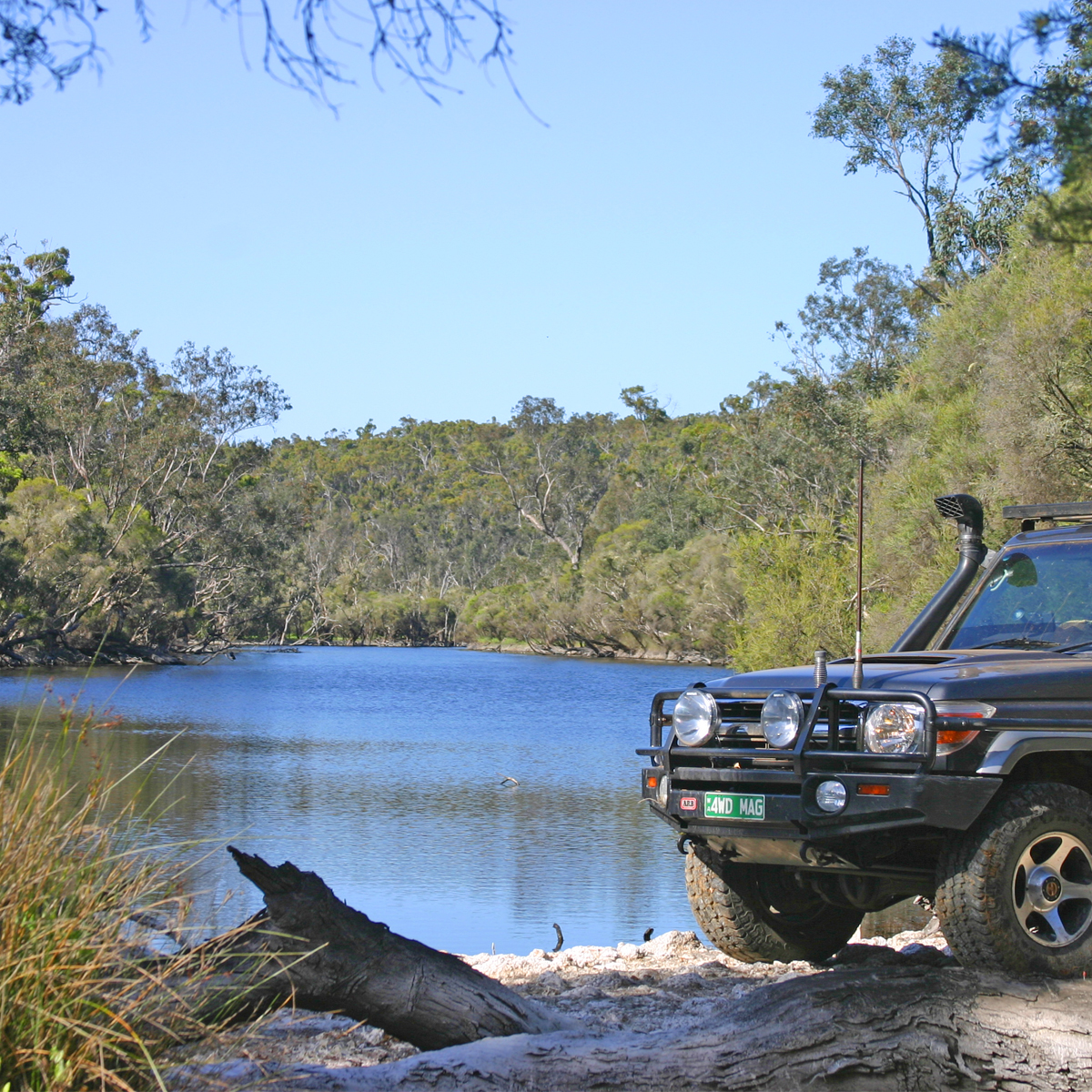 The Frankland River flows generally southwards, south-westwards then westwards some 162 kilometres into Nornalup Inlet near Walpole. Captain Thomas Bannister referred to it as ‘a considerable river … much too deep to pass’ when he came across its entrance into the estuary on 22 January 1831. This was during an overland exploration from Perth when surveyor George Smythe had managed to miss Albany altogether by reaching the coast in unknown country 120 kilometres too far west. Bannister and his men, sick and weak with supplies exhausted, were forced to follow the shoreline eastwards for fifteen days, circumnavigating the several estuaries on that route while they subsisted on a meagre diet of tea, wild figs that gave them diarrhoea, a few black cockatoos brought down with muskets, shellfish knocked off the rocks with an axe, rock crabs, periwinkles and a few small fish they caught that Bannister likened to boiled leather. The men and their horses managed to wade across the estuary at the mouth of the river at low tide and they all reached the settlement at Albany safely although, needless to say, the captain was less than impressed with his surveyor’s navigating skills.

Bannister hadn’t given the stream a name and, in the course of adding the expedition’s findings to the overall plan of the colony, Governor Stirling coined the name Frankland River. This appears to have been because it was assumed to pass close to Mount Frankland, sighted and named from a distance in December 1829 by explorer Dr T.B. Wilson. The good doctor had climbed Mt Lindesay to take a round of compass bearings to distant peaks. Noting how conspicuous these were he decided they would be grand points in a trigonometrical survey of the country, and named them after several Surveyors General in Australia: Roe (W.A.), Mitchell (N.S.W.) and Frankland (Tasmania). George Frankland (1800-1838) had taken up his position in Tasmania in 1827 and eagerly undertaken the exploration of the wild country westwards of the upper Derwent, the upper Huon and the central highlands around Lake St Clair. The most significant outcome of these efforts was the unravelling of the Derwent, Gordon, Huon and Nive river systems. He quarrelled continually with Governor Arthur but was popular with his officers whom he defended against all criticism. After his premature and sudden death they erected a monument to him. His home, Secheron House at Battery Point, Hobart, built in 1831, is beautifully preserved and heritage listed.

A river with two names

The lower, west-trending extremity of the River was traced by Alfred Hillman in July 1833 when he described the banks as resembling an English Demesne, ‘beautiful little rises, clothed with clumps of Peppermint, White Gum, Banksia, black wattle and tea tree, clear of underwood, but decked with fine long grass.’ In December 1835, during a traverse of the Perth Albany Road (now the Albany Highway), Surveyor General John Septimus Roe named a river he crossed the Gordon River after George Hamilton-Gordon, the Earl of Aberdean (1784-1860), a Scottish politician who was Secretary of State for War and the Colonies at that time and, much later, became Prime Minister of the UK. It wasn’t until April 1846 that surveyor Augustus Charles Gregory traversed the Gordon downstream to the west and discovered it turned southwards and was in fact the Frankland. In one of those peculiarly colonial solutions it was decided to retain the Gordon River sobriquet for the generally westerly flowing 120 kilometre long stream and to make the source of the Frankland the junction of the Gordon River with Towerlup Brook. Accordingly, that’s where our trip following the Frankland really begins although we’ve trip-noted from Boyup Brook as a picturesque route to reach that point.

Just a short distance downstream from this confluence of watercourses a small cemetery can be found down Yeriminup Road and Yeriminup Bridge will be about as close as you’ll get your vehicle to the start of the Frankland. While you’re there check out the rather startling flood level marker at the far side of the bridge before returning to our route and heading down to Frankland River townsite. Land for this little town was first set aside in 1909 but the only developments there for many years were a hall and a school. ‘Frankland Townsite’ lots were surveyed and gazetted in 1947 and the name was expanded to Frankland River 60 years later to confirm to tourist and viticulture usage.

South of the town, after passing through pleasant farmland and rolling hills, we turn onto the Muir Highway and take a detour down to the Lake Muir Observatory for a unique glimpse of the lake and its prolific bird life. Then it’s a plunge into forest country to return to the Frankland via Myalgelup Road. Although the route is seldom within sight of the river it’s worth going down to the crossings wherever possible to check out the pleasant campsites and picnic spots. Although the route passes through the Frankland State Forest and the Mount Frankland National Park we weren’t able to effect a crossover to include Mount Frankland in the trip because of forest quarantine requirements for disease risk areas. Dieback is an ever-present threat to our southern forests.

From the Muir Highway south, the Frankland runs between higher country to the west and sandy lowlands and swamps to the east. The track surface varies from laterite gravel in the jarrah stands to sand on the lowlands where we expected boggy sections from the recent rain. These never eventuated but we can say, if you find a track underwater in the swampy areas – walk it first because it could be your undoing.If you do this trip in the Summer you’ll be slowed by Heath Monitors. These big lizards will stand their ground against oncoming vehicles and more than once we had to stop to shoo them off the track. Once you leave the irregular swamp/jarrah country you start to get amongst Karri stands, the magnificent tall timber alternating with lush farming country north of Walpole. You’ll know you’re back in the land of the tourist when you reach Circular Pool and its car parks and pathways. It’s well worth a visit though. Here the Frankland rushes and tumbles over a boulder strewn bed into a large pool surrounded by Karri forest. The circular tag relates to the water action once it make the pool. It can be quite hypnotic.

Further downstream along Tingle Drive, the Frankland tracks through an almost sheer-sided valley before flattening out to meander past dense Karri forest on its final leg to Nornalup Inlet. Unfortunately the mouth of the Frankland can’t be reached by road, but the next best thing (if not the best thing) is to get on the water in a canoe. Currently the closest canoe hire is in Denmark.  Once you’re at Nornalup on the South Coast Highway, east will take you to the Tree Top Walk and Peaceful Bay while to the west you have Walpole and the Nornalup Inlet to fish or just explore. Hard to improve on that.