This is a great little drive for anyone who is new to taking their 4WD off-road or is looking for an easy drive just outside of the city. The tracks are all marked as being EASY or MEDIUM, with the final stretch back to the bitumen being well formed gravel. Despite the temptation, you should engage 4WD once you leave the bitumen and only drop back to either 2WD or AWD once back on the black top.  The use of 4WD reduces the amount of wheel spin and therefor wear and tear on the track and greatly improves the road holding ability of your vehicle.  There are multiple sections where there are deep wash-outs and several rocky areas.

Because it accesses a National Park, the usage of this route by 4WD  is monitored by DPAW (Department of Parks and Wildlife) staff. The route accesses an area that has been adoted by the Eastern Suburbs 4WD Club, who are doing an excellent job of maintaining it. 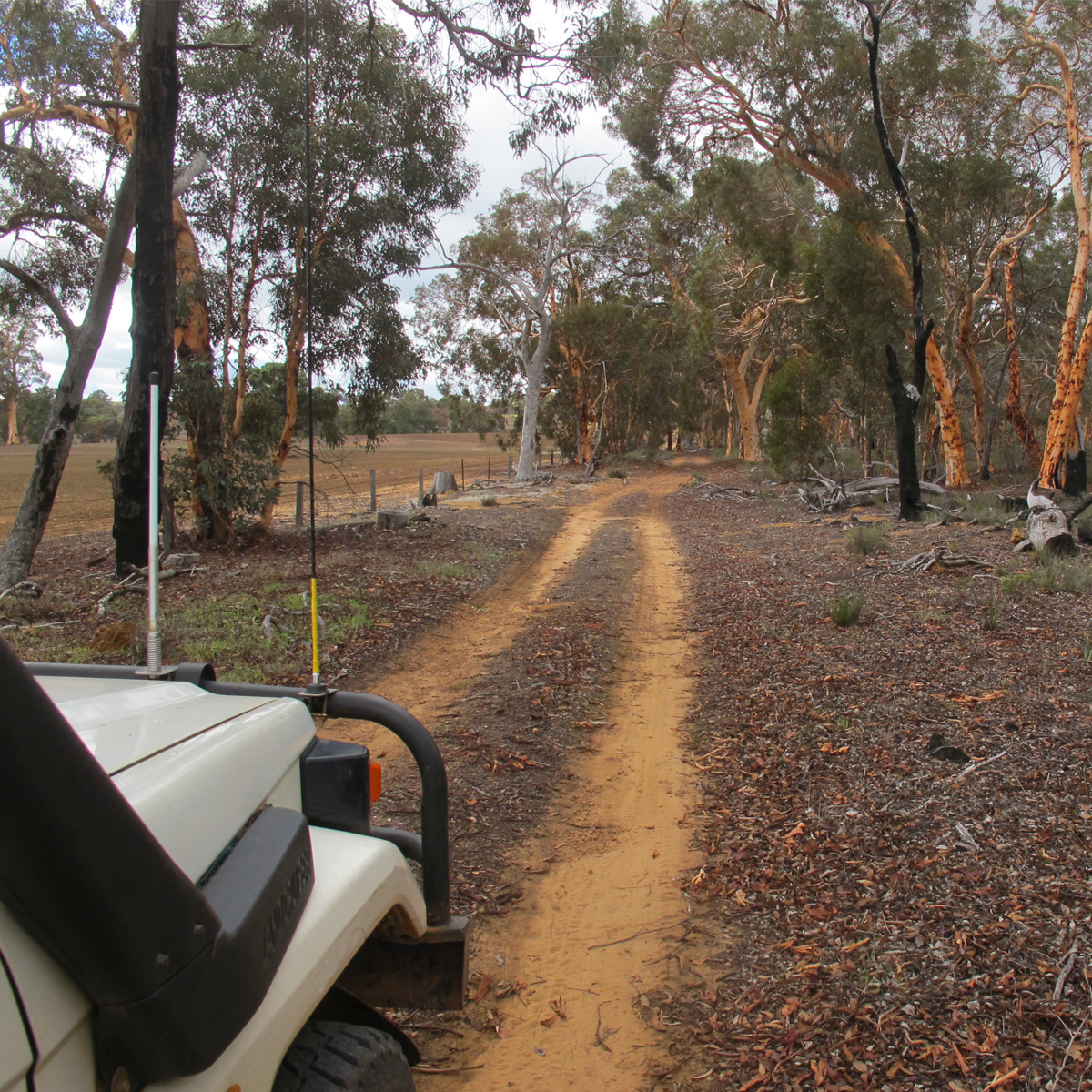 The trip follows a series of forestry tracks past the ruins of a convict road station to the Mount Observation picnic site before circling the edge of water catchment through undulating Wandoo forest country via Catchment Road. The latter runs along a pronounced ridge that is the limit of Mundaring Weir’s catchment area, hence the name. It has State Forest on the west, and some fine views over farmland to the east. At several points it is possible to catch glimpses of the Mount Bakewell tower above York and also Mount Dale far to the south-west. After crossing Helena Road and swinging westwards along the Darkin River, the trip is concluded by a picturesque return to the Great Southern Highway via Yarra Road.

It all begins at The Lakes

The starting point for the trip is The Lakes Roadhouse at the junction of the Great Eastern and Great Southern highways. The locality takes its name from nearby, reed-covered Lake Manaring and the area has a long history as a significant staging point for coaches on the road between Guildford and York after its re-alignment to ‘King Dick’s Line’ in 1855. An inn established here by Robert Doncan was taken over by Henry Horton who ran it until the mid 1880s when completion of the railway curtailed profitable roadside trading.

The bushranger James Lily was once captured by police at this inn after Horton plied him with free booze until he passed out. Prison escapes and bushranging was so rife in the 1860s that a police station was located near the inn to bring law and order to what was then considered a remote and lonely region. The Lakes Police Station was closed down and offered ‘to let’ in 1878, only to be re-opened six years later under Constable Joseph O’Hara. Soon after taking over the station, O’Hara hit the headlines by capturing Carberry, one of the murderers of a Beverley policeman.

End of an era

The rip-roaring days of The Lakes were over by 1887 when the police station was closed down for good. From the 1920s, the historic old building, restored and extended, did service for many years as a popular RAC roadhouse where early motorists found weekend accommodation a bracing experience.

Further east, the route passes north of Ebeneezer Flat where early settlers lost hundreds of sheep when droving their flocks through to York. The cause was York Road Poison, one of the Gastrolobium pea plants that are common throughout this region. Nganguring Road bordering the northern edge of proposed National Park, approximates the line of part of the original York Road as surveyed by Philip Chauncy in 1846. Chauncy was also responsible for recording almost all the Aboriginal place names known from this region during his road survey, having received the permission of John Septimus Roe to retain ‘an intelligent native’ for that purpose throughout the survey. Unfortunately, he didn’t jot down the meanings of any of these names so they remain something of a mystery.

One of the watering places on Chauncy’s line was ‘Manyuering’, also known as Sandsprings. The spring there has been excavated to provide a water collection point for firefighting and roadwork. It was close enough to ‘King Dick’s Line’ to become a road station housing convict road workers in the 1850s and the stone fireplaces of their V huts can still be found scattered through the bush on the north side of the spring. It was Chauncy who named Mount Observation when he took sights from there to Mounts Dale and Ommanney. At the time, he recorded constructing a small cairn of stones on the summit but several searches of the area have failed to reveal this relic.

A source of water for Perth

The remainder of this trip negotiates picturesque Wandoo forest far from the turbulent history of the York Road, a vast water catchment area criss-crossed with fire management roads. Over the years, this area has been frequented by sawyers, sandalwooders and kangaroo shooters, but its main usage now involves apiarists, forest managers and Water Corporation officers concerned with the protection of the vital Mundaring Weir catchment. At present, the parklike vistas of the Wandoo woodlands and the occasional granite outcrops that separate them make pleasant picnic destinations that can still be enjoyed by 4wdrivers following these trip notes.

Regardless of the type of adventure you are embarking on, keeping the basics in your vehicle means that you should be able to deal with most situations that may arise.

Great for getting yourself out of a sandy situation. They also work really well in mud. Unless you are heading out during the wetter months, you will more than likely not these during this trip.

Much better than a stick and a lot more accurate. You will more than likely need to adjust tyre pressure on this trip. The track is in very good condition and there shouldn’t be a need to reduce tyre pressure.

Taking your time and stopping to look around, allow up to 4 hours to complete this circuit plus travel time to and from.  There is patchy mobile reception (Telstra) at various high points along this route, with the most reliable area being around The Lakes.  It is a good idea to check in with whomever you have told about your trip here.

If you are a little rusty on how to treat a snake bite then take a look at our article here.

Ensure there is enough water in the vehicle for everyone who is coming with you. It is better to err on the side of caution and take more water than you think you will need.